Tour guides get their own tour of Misty Fiords

One the top deck of the St. Nona, a couple along for the tour for tour guides looks out at New Eddystone rock, which is the hardened core left over from a volcano that has eroded away.

On a beautiful, sunny, calm, warm day, a tour boat left downtown Ketchikan, headed toward Misty Fiords National Monument. That’s not an unusual occurrence, especially during summer, when Ketchikan is a stopping point for thousands of tourists traveling on huge cruise ships. But this tour boat had no tourists on board. It was full of tour guides.

For the past half-dozen years or so, the U.S. Forest Service’s Ketchikan-Misty Fiords Ranger District has offered an educational program for tour guides. The program used to take place at the Southeast Alaska Discovery Center, in a closed auditorium. Last year, though, they and tour company Allen Marine got together to offer a more hands-on way to learn about Misty Fiords, one of the area’s most popular destinations for summer visitors.

Lorelei Haukness is a wilderness and recreation specialist with the district. She says about 10,000 visitors see the monument annually by floatplane, alone. That doesn’t include those who visit by boat. Boats like the St. Nona, the large, fast-moving catamaran taking the tour guides out to Misty. She’s one of a fleet of ships operated by Allen Marine, which employs quite a few local residents as interpreters, or naturalists, both terms that basically mean tour guides.

Along for the trip is Crystal Hennings, a summertime tour guide who is brand-new to

Ketchikan. She’s been out to Misty already on a training run, but this trip is different.

“I’m definitely looking forward to all the information. I’m new to the area and I just want to learn about the nature that surrounds us. That way I can answer any questions any of the passengers have. I don’t know them myself, so it’s better to get them from the experts.”

She has the right idea, taking notes. There was a lot of information. Too much to retain from memory alone. The talks started out with Silviculturalist Sheila Spores, detailing all the different trees on the Tongass.

“The most common tree found on the Tongass is Western hemlock,” she said. “So, 75 percent of the trees are Western hemlock. So if someone asks you what a tree is, three out of four times you’re going to be right if you say Western hemlock.”

Then geologist Jim Baichtal gave an overview of the area’s geologic history. He talked a little about a recently discovered volcano, which blew its top about 8,000 years ago in an area that’s now under water.

“The problem from a geology point of view is: ‘How do you get a geologic feature that erupted in atmosphere in the bottom of a 1,000-foot-deep fjord?’” he said. “Sea level had to be at a much lower level.”

Speaking of volcanic features, Baichtal also described how New Eddystone, a volcanic plug and one of the iconic features of Misty Fiords, remains essentially uneroded.

“The plug, where the lava came up, it was better cemented together, so it could survive wave action, and the flank material couldn’t,” he said.

Once the St. Nona motored into Rudyerd Bay, the boat slowed down and everyone, tour guides, experts, reporters, stopped what they were doing and just looked. Misty Fiords was designated a national monument for a very good reason. It’s beautiful. Sheer rock walls jut nearly straight up from the water; streams of snowmelt cascade down the cliffs, where birds fly back and forth from their nests, built into crevices in the rock face.

Spores was one of the gawkers up on deck, and true to her calling, she exclaimed over some of the trees that somehow found a way to grow on a rock wall.

“They lost the lottery on location,” she said, shaking her head at the trees. “(But) they have a good view.”

Before heading out of the monument, Captain Eric Lunde slowed down so everyone could 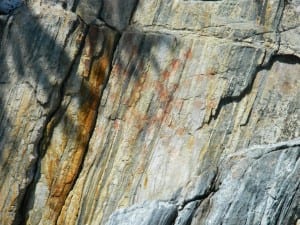 This pictograph features a central circle, depicting the sun, with lines of dots radiating outward, representing the sun’s rays.

take a good look at a faded pictograph, a picture painted onto the rock face by the area’s original inhabitants.

On the way back to town, the presentations resumed, with information about some of the area’s wildlife. Melissa Cady is a bird expert with the Forest Service, and she was taking her first trip out to Misty Fiords. She walked the tour guides through some basic birding.

Ron Medel, a fisheries manager, wrapped up the presentations with details about Tongass salmon.

“The opportunity to get to be on a tour with people who are the premiere expert in their field, you just can’t beat that,” she said.

McQuerry is one of this summer’s tour guides. She’s going to be a “relief naturalist” for Allen Marine.

Speaking of nature, right on cue, as the ship headed out of monument waters, a humpback whale, perhaps on contract with the tour company, popped its head up a couple of times, then sounded, giving a great view of its tail flukes before disappearing into the deep.

For those science fans out there, KRBD will have more on that recently discovered underwater volcano that Jim Baichtal mentioned.

It was a nice day out in Misty Fiords National Monument.