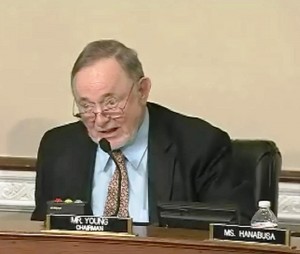 The legislation would transfer 3,600 acres of the Tongass National Forest to the Southeast-based regional Native corporation.

Sealaska’s timberlands have been logged of much of their harvestable trees. Officials say the acreage will keep timber operations going.

At a Congressional hearing Thursday, U.S. Forest Service official Jim Peña objected to a requirement to transfer the land within 60 days of passage.

“These two parcels would be conveyed without the carefully negotiated replaced to special use authorizations and public access that many stakeholders view as essential,” Peña said.

One parcel is on the Cleveland Peninsula, between Wrangell and Ketchikan. The other is at Election Creek, on Prince of Wales Island. (Read the measure.) (See maps of the parcels.)

The acreage is also part of a much larger measure that would transfer about 70,000 acres to Sealaska.

That bill was also before the committee. (Scroll down to read earlier reports on both bills.)

“First introduced over six years ago, this bill has undergone an extensive vetting process throughout the region. It has resulted in meaningful changes, such as providing for continued public access to lands, and modified certain lands among them,” he said.

The Forest Service’s Peña said the larger measure is much improved. But he wants further changes before the administration lends its support.

He said the bill “leaves out key provisions essential to a balanced solution and adds others that make reaching a solution more difficult. Consequently the Department of Agriculture does not support enactment.”

Some environmental groups and towns near areas to be logged oppose the measure.

He said Sealaska’s logging will reduce access, as well as wildlife numbers.

“It’s kind of Sealaska to offer access for guides to utilize these lands for a 10-year period after their Forest Service permit expires. (But) I don’t know there will be much benefit. Having access to clearcut areas wouldn’t be worth anything. There’s no wildlife there. They are D-O-N-E … finished,” Rosenbruch said.

Last year’s version of Young’s bill passed the House, but not the Senate.

And the Senate’s latest version, sponsored by Lisa Murkowski and Mark Begich, has undergone more negotiation and changes.

Sealaska board member Bryon Mallott said that measure is more likely to be the final legislative vehicle.

But he prefers the House version.

“In my personal judgment, there is more equity and justice in the House bill. But I also know from long, long experience, that what the Native community can easily and passionately feel is equity and justice for others is often very hard to ultimately make possible,” Mallott said.

Young’s Sealaska bills now head to the full House Resources Committee. If either passes, it will go to the House floor for a full vote.

It would most likely be packaged with other legislation. That’s what happened last year.

Read earlier reports on the legislation: