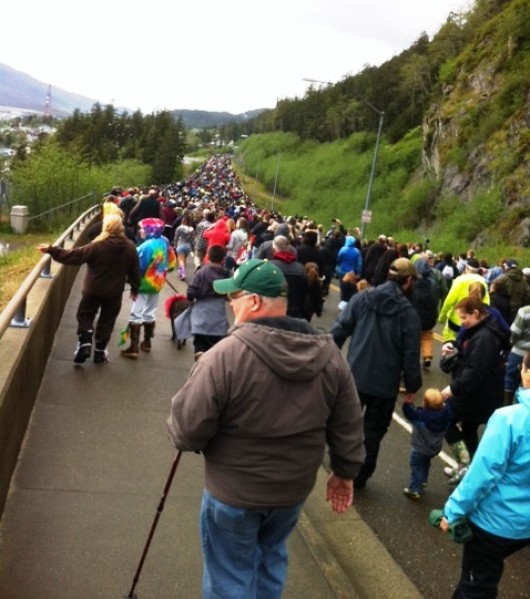 And now for some breaking news. Record-breaking, that is.

Nearly 2,000 people turned out in Ketchikan Saturday afternoon to break the Guinness World Record for the largest rainboot race.

According to official U.S. Census records, Ketchikan’s population is just shy of 13,800 people. That’s the whole borough, not just the city. A couple hundred at a time will get

together for plays or concerts, but it’s very rare – perhaps unprecedented in the community’s history – for nearly 2,000 people in Ketchikan to congregate in one place, at one time for a single purpose.

But, on a beautiful afternoon with just a sprinkling of rain to get people in the proper mood before the clouds lifted, it happened. A sea of people, all wearing rainboots, gathered, mingled, talked, laughed, sang and finally walked – a few ran – to break a record.

The previous record for what’s officially known as the largest Wellington boot race was held by the British county of Lincolnshire, which is about a two-hour drive from London.  It’s known for its attractive coastlines, Lincoln Castle, its local recipe for stuffed chine – a brined pork dish – and, until recently, its world record.

That county broke the record in 2009, when 1,366 people marched a mile in their Wellies. Ketchikan’s race more than met that challenge. The number announced after the race, while not confirmed yet by Guinness, was 1,976.

As the crowd gathered at the starting line, the city’s mayor stood by, ready to kick off the race.

When asked how he was talked into participating, Lew Williams III answered, “They gave me a gun. “

It’s been said, and evidence seems to prove, that Ketchikan residents will use any excuse to dress in costume. So it seemed natural for a few superheroes to find their way into the crowd.

“We are breaking a world record, right?” said Tiffany Pickrell, dressed in a Wonder Woman costume. “And that’s something Wonder Woman does every day.”

And a couple of ducks — more specifically, Rotary members dressed like ducks to promote their raffle drive.

Adding to the festive atmosphere, a trumpet serenaded walkers at the halfway mark.

It wasn’t just local folks walking in the race. People came from neighboring islands to help

break the record, and some came from much farther. Femke Boersma and Kelli Breemer are here from the Netherlands, visiting a friend.

Boersma said it was good timing.

“We were very excited that the race was during our time here,” she said. “We’re here for six days, and we feel like we traveled all the way from our own rainy country to help set this record.”

The two had to borrow rainboots for the race, and they say they’re impressed with the ubiquitous ExtraTufs boots that many local residents wear. However, they won’t be taking a pair back to Holland.

“We don’t have such a rough country,” Breemer said. “Our country is not extra tough.”

At the end of the short trek along Ketchikan’s Third Avenue, volunteers collected wristbands, proving that each participant officially completed the race. The bands, along with other evidence, will be shipped to Guinness headquarters in New York for confirmation of Ketchikan’s accomplishment.

But we know we did it.