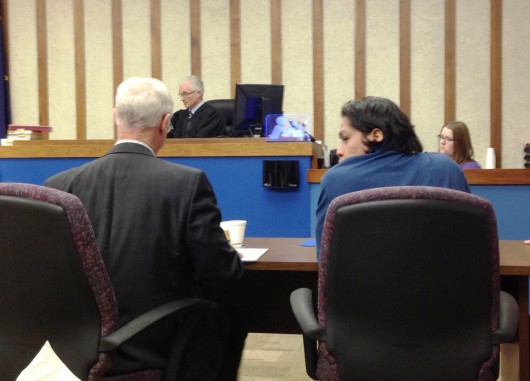 William Buxton, right, awaits the verdict Monday in Ketchikan Superior Court. He is sitting with his attorney, Sam McQuerry. In the background is Superior Court Judge Trevor Stephens. (Photo by Marco Torres)

The jury had spent about five hours deliberating on Friday following closing statements from the prosecution and defense. They didn’t reach a unanimous decision by close of day Friday, so the judge sent them home for the weekend, with orders to not talk about the trial with anyone.

They gathered back in the jury room at about 9 a.m. Monday, and within about 90 minutes, were able to reach a verdict.

After it was announced that the jury was done deliberating, it took a little while for the judge, attorneys and defendant to gather in court. Once they all were there, the jury was brought in, and the foreperson handed over the verdict form.

Superior Court Judge Trevor Stephens then read the verdict aloud: “In the case captioned State of Alaska versus William Buxton, we the jury find the defendant William Buxton guilty of the offense of murder in the first degree as charged in the indictment, dated today and signed by the foreperson.”

Buxton was charged with first-degree murder for the death his aunt, Leona Meely, who was killed when an early morning argument over cigarettes escalated into a brutal killing. District Attorney Steve West said that Buxton stabbed Meely multiple times in the torso, slit her throat and finally stabbed her in the neck.

The defense didn’t argue with any of those claims. Instead, attorney Sam McQuerry asked the jury to consider Buxton’s state of mind, and whether he could have intended to kill his aunt.

Several witnesses testified that immediately after the killing, Buxton talked about shadows only he could see, said he was one of the four horsemen, and that he was concerned about a “globe” in the hallway.

The defense was not claiming insanity, however, which was made clear to the jury in its written instructions.

After the jury was excused from duty, Stephens ordered a presentence investigation and report, which is standard practice for felony convictions. He set a sentencing hearing for 9 a.m. Sept. 6th in Ketchikan Superior Court.

Stephens also lifted an order prohibiting Buxton from contacting his mother, who had been a key witness in the trial.