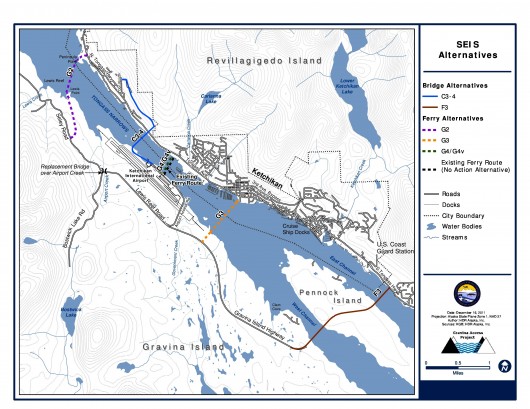 Options for bridges and ferries are in the newest Gravina Access study released Friday by the state Department of Transportation, with up-front construction costs ranging from $23 million for the cheapest ferry option, to $276 million for the most expensive bridge plan.

Even doing nothing would cost more over time than building a bridge, according to the draft Supplemental Environmental Impact Statement.

Ketchikan Gateway Borough Manager Dan Bockhorst said he hasn’t yet read all 690 pages of the draft SEIS, but he’s waded through some of it. He said he noticed the lifetime cost difference between ferries and bridges.

“Two and a half years ago, the Assembly expressed preference for the two bridge options,” he said. “They are still under consideration. They remain the cheapest in terms of lifetime costs for access to Gravina by far. The matter will be presented to the Assembly for further consideration. It will be places before the Assembly at the first meeting in August.”

Here’s a brief rundown on each of the bridge options:

The bridge options each would include a $5 toll, which would be reduced to $2 after a few years. Passengers already pay $5 per person to ride the airport ferry.

That doesn’t cover the ferry’s expenses, though, and Bockhorst affirmed that ferries cost more over time.

“The ferry systems are very expensive to operate and maintain,” he said. “And they will continue to be so unless we come up with an alternative.”

That assertion is bolstered by the DOT study. It shows that the no-action alternative, which would keep current ferry service with no upgrades, would cost an estimated $590 million over 75 years, which is $60 million more than the lifetime cost of a bridge.

Not including the no-action alternative, here’s a brief rundown of each of the proposed ferry options:

DOT spokesman Jeremy Woodrow said the department has not included its own recommendation in this study.

“Part of the purpose of the comment period is for the public to review, comment, provide their recommendations and thoughts, and that’s how the department will use that information as a basis for coming up with a preferred alternative for the final SEIS,” he said.

The point of the project is to improve access to Gravina. Woodrow said each of the alternatives would achieve that that in some way.

He said there will be a public meeting in Ketchikan in mid-July. DOT officials hope to have a recommendation by fall, with a final SEIS by spring of 2014.

The public comment period lasts through Aug. 13. An open house with information about the study is set for 11 a.m. to 5 p.m. July 17 at the Ted Ferry Civic Center, with the public hearing from 5 p.m. to 8 p.m. at that same location.

To see the study and for more information, go to http://dot.alaska.gov/sereg/projects/gravina_access/

The project to improve transportation between Ketchikan’s Revillagigedo and Gravina islands has been an ongoing topic for many years. It appeared at one time that the community’s preferred alternative – two bridges spanning Pennock Island – would be built, when a federal earmark was approved specifically for the project.

However, in response to a national backlash against earmarks in 2007, then-Gov. Sarah Palin stopped that project, nicknamed the Bridge to Nowhere, and directed the Department of Transportation to find a cheaper alternative.