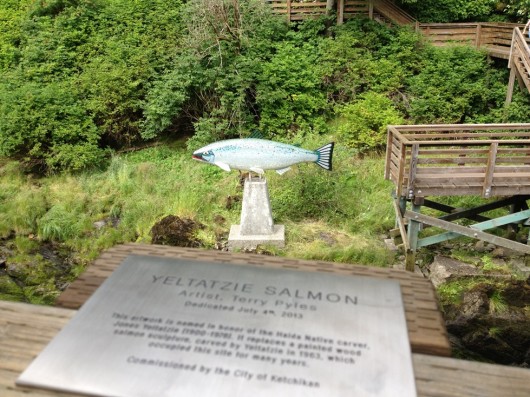 The new salmon sculpture on Ketchikan Creek was unveiled during the recent Fourth of July celebration.

One of the many local events celebrating July 4th was the unveiling of the replacement salmon sculpture at the foot of the fish ladder on Ketchikan Creek.

The original cedar sculpture of a king salmon, carved in the mid-1960s, was removed in 2011 due to extreme deterioration. Through a call for art last year, Terry Pyles, the local artist behind the piling cap mosaic sculptures near Ketchikan’s waterfront, was picked to build the new fish.

Ray Troll, another local artist, spoke at the public unveiling ceremony Thursday. Standing in front of a sizable crowd on the north side of Ketchikan Creek, he praised Pyles while ribbing the other artist about his shyness in front of a microphone. Troll spoke to the importance of the day’s event.

“And we have this great relationship with the people who come to visit our town and learn from our culture and our history,” he said. “So that’s why I think it’s a really special day today, when there’s so many cross generational, cross cultural things happening. I think that’s what’s happening today – it’s a wonderful story that connects one generation of Ketchikan artists to another.”

One doesn’t have to look further than the name of the new sculpture to see that connection. 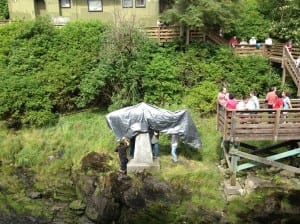 Pyles named the piece “Yeltatzie Salmon” after the man who was commissioned to carve the original sculpture.

Jones Yeltatzie, a Haida carver, was born in 1897 and spent much of his life in Ketchikan. He was hired by the Ketchikan Chamber of Commerce in 1963 to carve a wooden salmon to stand near Ketchikan Creek as a tourist attraction. The sculpture, made from red cedar, had a storied history: According to the Ketchikan Area Arts and Humanities Council, the wooden salmon was thrown into the creek by vandals on more than one occasion. It was taken down repeatedly for repairs due to rot and other damage, before it finally was removed permanently two years ago. The sculpture made one last appearance on a float in this year’s 4th of July parade.

Tommy Able served as a city administrator in Craig and once was the vice president of the Tlingit-Haida Central Council. He said that Yeltatzie, his great-uncle, influenced his outlook on life.

“He always focused on respect, honor, and keep going,” Able said. “Keep your head up, don’t ever go backwards. Always keep going, don’t give up. And the things he would tell me about our people, the honor, the rank that we have, or used to have and are now redeeming. Those are the things that told me, as a Haida, who I am.”

Able, who the Yeltatzie family nominated to speak for them, also extends thanks to the City of Ketchikan on behalf of his clan for honoring his uncle. On a lighter note, he adds that Jones Yeltatzie enjoyed story-telling, extravagant hats and poker.