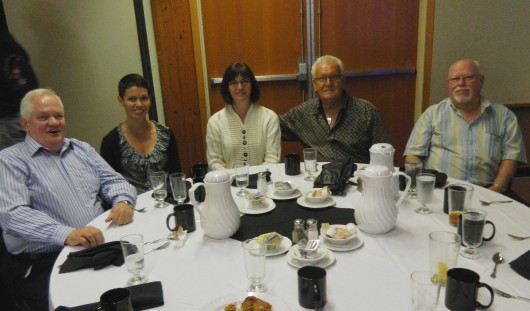 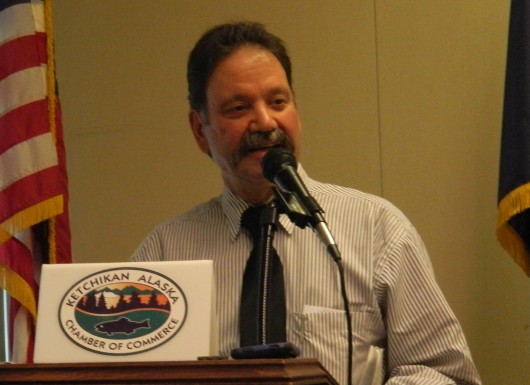 A delegation from Prince Rupert, British Columbia, attended a recent Greater Ketchikan Chamber of Commerce luncheon. They came for the Fourth of July festivities, and to speak about expansion projects taking place at their home port.

Prince Rupert Mayor Jack Mussallem was accompanied by a group of officials from his town, as well as from the neighboring community of Port Edward.

“We’ve got a lot in common, and we never forget that Ketchikan is our sister community,” said Mussallem. “And not only do we have similar weather and similar industries, but we have what I think are increasing opportunities.” 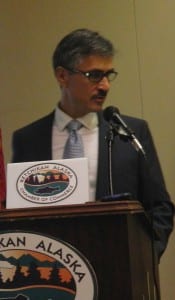 Like Ketchikan, Prince Rupert had a resource-based economy, but a storm of downturns resulted in hard times during the 1990s. Their own pulp mill closed after going through bankruptcy, the salmon industry slumped, and coal and grain terminals saw decreasing numbers.

But the Canadian community did not give up. It converted the Fairview Terminal to handle container cargo, and expanded its port terminals.

Angus explained why he believes the ports have been so successful.

“We’re the closest, the first port of entry into North America. We have the deepest natural harbor in North America, and I think the deepest in the world. It’s safe and sheltered –we’re surrounded by islands so it’s a pretty safe port. It never freezes. It’s uncongested. So when the train leaves the station, and hits to Chicago, or Memphis, or Montreal, it’s in the hinterland – whereas in the lower states in the US or even Vancouver, it’s got to go through all these communities before it can get out and pick up speed. For us, that’s an advantage,” said Angus.

There were other advantages given for shipping cargo through Prince Rupert. For example, he explained how the port connects to the Canadian National Railway.

“70% of containers that come through are actually coming down to the Chicago-Memphis corridor. Now within 500 miles of CN’s rail resides about 70% of Americans. So you can see this is where the population is… So the containers that are coming through, when we first open up, 70% of those containers are coming into the US,” he said.

Angus adds that other terminals on the port are important to its success. A cruise facility and grain terminal are both doing well. The coal terminal also is expanding.

The facility is owned by Ridley Terminals Inc., which recently was accused of dumping coal into ocean waters, as well as breaking other environmental standards, according to Prince Rupert newspaper, The Northern View.

Despite those allegations, coal is pivotal to the port’s tonnage. Angus reported that half of the 21 million tons that comes through Prince Rupert’s port is from the coal terminal.

He projects bigger numbers when all the expansions are completed.

“So you put it all together, speed it up to 2020… if all of this becomes a realization and becomes  a reality for the community, we project this will be about 90 million tons annually,” Angus said.

Mussallem concluded the presentation with examples of opportunities for Southeast Alaska communities.

He spoke of plans for a wood pellet terminal, and mentioned a nearby saw mill – two sources of material that might need transport and distribution. The container port also will support more refrigerated containers, to facilitate seafood transportation.

Prince Rupert and Ketchikan have long been connected through economic and resource similarities. The Alaska Marine Highway also connects the two communities with regular ferry service.

Ketchikan recently sent a group of officials to Prince Rupert on a trade mission, and the Canadian city participates in Ketchikan’s Fourth of July festivities every year.

This story has been updated. A name had been misspelled.

Various representatives from the communities of Prince Rupert and Port Edward, at the Chamber lunch.