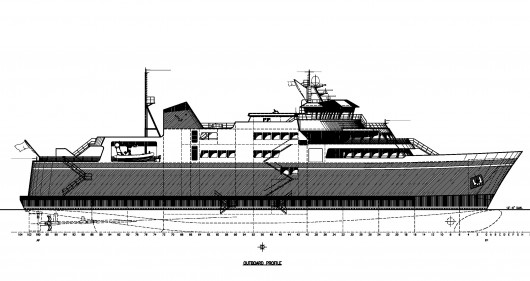 A drawing of the Alaska Class Shuttle Ferry by Elliot Bay Design. A new report estimates building two will cost $112.2 million. They will likely be built at the Ketchikan shipyard and will sail Lynn Canal.

The latest design for new shuttle ferries includes a covered car deck. But it doesn’t address some other concerns, such as minimal food service.

“The point of shielding the car deck from extreme weather really isn’t the main reason behind it. More of a reason is that the additional costs really wouldn’t be that much to the point where it would be worthwhile leaving it open,” Woodrow says.

“That’s a good thing. I think that was kind of a clear message that they got, that people didn’t want to see an open car deck,” Korsmo says.

Size and capacity requirements have not changed much since the last proposal.

Shuttle ferries would be 280 feet long, larger than the small ferry LeConte, which sails the route part of the year.

They will have indoor seating for 300 passengers and parking for about 50 cars and trucks.

That’s been dropped. But Woodrow says some options remain.

“There’s going to be a theater lounge as well as a children’s area, a family area. And then there’s going to be what’s called a library or a quiet room as well that kind of acts as … the observation lounge, which tends to be a quieter area,” Woodrow says.

Plans continue to call for a small food court and vending machines.

Korsmo understands the need to save money, but says passengers will miss having a full kitchen.

“I took pictures this winter of the lineups on the LeConte of people waiting for food. So I’m sure it’s going to be somewhat of a letdown to the traveling public, especially in the wintertime,” Korsmo says.

The ships are designed to sail 12-hour days, not overnight. The design will include bow and stern doors to allow faster roll-on, roll-off loading and unloading. Side doors will allow docking at more terminals.

The latest cost estimate is $112.2 million for both ferries. That’s $5 million more than the previous figure, but still below the $117 million allocated by the Legislature.
In addition to Lynn Canal, the shuttle ships could sail to northern Southeast villages or Prince William Sound communities.

Public hearings are planned for August 20th, 21st and 22nd in Juneau, Skagway and Haines.