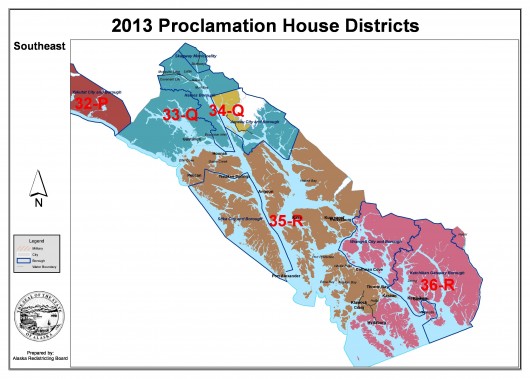 And we were just starting to get used to 33-Q.

The Alaska Redistricting Board released its final plan this weekend with new district lines, and the Ketchikan Gateway Borough now is part of House District 36 and Senate district R.

The new House district boundaries also include Wrangell, which had been paired with Ketchikan previously; as well as Metlakatla, Hydaburg, Loring and Hyder.

Most of Prince of Wales Island is in the new House District 35, which also includes Petersburg and Sitka. The two southern Southeast House districts make up the new Senate District R.

The process of drawing the state’s political boundaries has been going on for nearly three years. Along the way, board members described it as a “struggle,” Democrats characterized it as gerrymandering by a Republican-dominated group, and late in 2012, the Alaska Supreme Court threw out the plan and ordered a new one for the 2014 election.

Redistricting Board member Bob Brodie expressed relief at the idea that Sunday’s meeting could be the board’s last.

“It wasn’t an easy job in the beginning, and it wasn’t any easier later,” he said.

There are some major changes from the temporary map used in the 2012 election. It gets rid of a controversial district that mixed some Fairbanks area residents with rural Alaska; it removes Petersburg from Juneau’s Senate district; and it reconnects the Aleutian chain. All of those issues had been raised as constitutional problems in ongoing litigation, and board attorney Michael White said at the meeting that the new map addresses those legal claims.

During Sunday’s meeting, board members discussed the challenges of complying with both the Alaska Constitution and the federal Voting Rights Act.

The act, which is meant to protect the influence of minority populations, was partially struck down by the U.S. Supreme Court last month. Board member Jim Holm spoke critically of giving special treatment to Native voters.

“I find it to be disconcerting that we so many times try to allow people to have extra voting rights versus people who are just plain Alaskans,” he said. “I’ve been here 67 years, and I’m an Alaskan. I may not be an Alaska Native, but I’m a native Alaskan.”

The map still must be reviewed by the courts to determine whether it complies with state law.

Metlakatla was in House District 34 with Sitka and some of Prince of Wales Island, so until next year, that island community will continue to be represented by that district’s representative, Sitka Democrat Jonathan Kreiss-Tomkins.