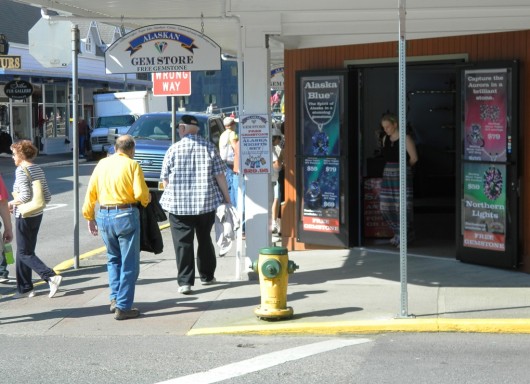 The Alaskan Gem Store is open for business Tuesday in downtown Ketchikan. That won’t last long, though, if the Ketchikan Gateway Borough’s court filing is approved.

He previously operated The Alaskan Gem Museum, which was on Main Street downtown. That now-defunct business also owes back taxes.

The borough’s motion asks the court to prohibit Brodie from operating either of his businesses within the borough until delinquent sales taxes have been paid, along with interest, fines and penalties, and attorney fees.

“The Ketchikan Gateway Borough has been diligent over the past three years to urge Mr. Brodie to comply with a city and borough sales tax code,” Bockhorst said.

Bockhorst said borough officials sent multiple letters to Brodie, and visited him at his place of business. And last year, Brodie was given citations for failure to comply. He didn’t show up for his court hearings, so the court decided in the borough’s favor and levied fines. Bockhorst said Brodie didn’t pay the court-ordered fines, either.

“We have continued to ramp things up to the point (where), after three years of virtually ignoring the sales tax code, we’ve taken the step to implement the use of tools the Borough Assembly granted with respect to the enforcement of sales tax code provisions,” he said.

Bockhorst estimates that Brodie owes $29,000 in back taxes – city and borough combined with interest and penalties.

“Those funds of course are critical in the sense that they are used to fund our schools, our hospital, our recreation facilities and the general governments of the City of Ketchikan and the Ketchikan Gateway Borough,” Bockhorst said.

He added that sales taxes also help keep property taxes low, so the borough will continue to go after businesses that are delinquent in paying taxes.

KRBD wasn’t able to reach Brodie for comment. There was no answer at the telephone number listed for the Alaska Gem Store.

The civil case against Brodie has been assigned to Superior Court Judge William Carey. According to the court system, a hearing has been scheduled for 9 a.m. Aug. 9.