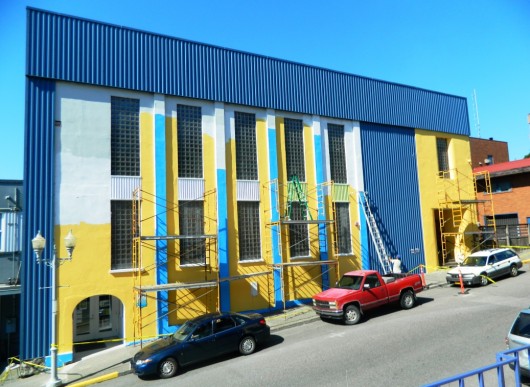 Gregg Poppen is seen heading up a ladder to paint the front of the Ketchikan Performing Arts Center.

If you stop by 335 Main Street, you will see caution tape, rigging and buckets full of colorful paint. The exterior of the planned Performing Arts Center is receiving a bright new look, with yellows, blues and greens adorning the art deco building in pop-art fashion.

“Well, the project is to paint the building,” said Gregg Poppen, Capital Campaign manager of the Performing Arts Center. For the past week, he has been leading the effort to update the look of the downtown building, which he says has been in disuse for about 20 years.

“It’s had many different lives and iterations, but we want the culmination to be a Ketchikan Performing Arts Center. So we decided that fundraising is underway – and going well – but we’re going to kick it into a second gear. With that, we should let people walking by, driving by, touring the building see that there’s fresh life here. And fresh life, in this case, starts with fresh paint.” 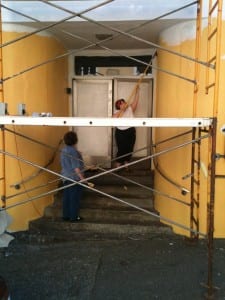 Charlotte Glover and Sharolyn Kroscavage painting the entrance of the building.

The building could use some “fresh life”. It’s been around since 1949 when it was originally the community Elk’s Lodge. It was later revived as the Fireside Restaurant, and over the decades the building has been used for all kind of events – from performances, to meetings, weddings, dances, and more. Poppen added it even housed a bowling alley and a spa.

Poppen said the building will become a home for local performance groups First City Players and Ketchikan Theatre Ballet, as well as a venue for community use.

Poppen hopes the building will have a finished façade in time for this weekend’s Blueberry Arts Festival. He and close to 20 other volunteers have been working all week to paint the building. He said the colors for the project were chosen from the Performing Arts Center logo.

“The colors reflect the logo that was chosen for the PAC, which has six ‘blocks’ of glow, basically – which refer to the six window frames that are familiar features in downtown.”

But don’t expect the colors to stay forever.

“This is stage make-up,” he said. “This painting probably won’t be the final finish when it is fully developed; when it’s fully fledged. But for now, it does reflect the colors of the stage lighting – the bright colors that are reminiscent of people being illuminated in performance. And it will change of course. Yes, it will be something else entirely, we don’t know what. It might end up being colored very similarly. We just don’t know.”

Poppen and the Performing Arts Center committee are still calling out for volunteers to help finish the project – anyone is welcome to just stop by the building and paint. Additionally, the group is looking for a mechanical lift to reach the top portions of the building that can’t be reached by rigging, in order to complete the job by Friday.