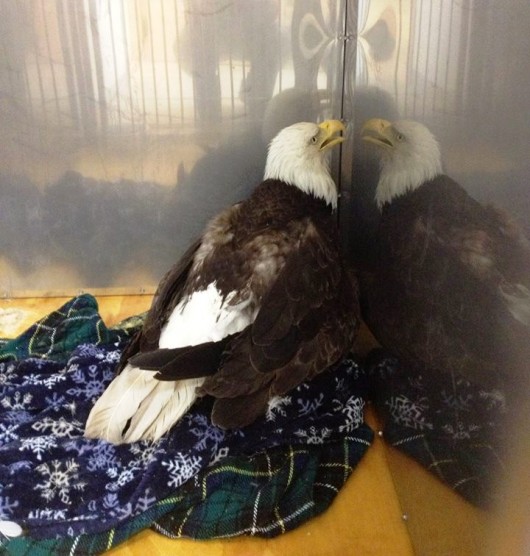 An eagle rescued Sunday night in the Carlanna Lake area is seen at Island to Island Veterinary Clinic before it was transported to Sitka on Monday. (Photo courtesy Island to Island)

A downed eagle was on its way Monday to the Sitka raptor center after some local volunteers captured it Sunday night in the Carlanna Lake area and kept an eye on the bird overnight.

Jeff Dubry discovered the eagle while he and his son were hiking along Carlanna Creek. They were on their way back, a little after 8 in the evening, and they heard a rustling in the bushes. DuBry said his son reached for his pistol, just in case it was a bear.

“But we seen the white head,” he said. “Just seen this eagle. It kinda looked like it had a broken wing. Its wing was kinda tweaked. We walked up to it, and it would kind of close its eyes and its head would drop. We could tell something wasn’t right.”

The two called Alaska State Troopers, and were directed to a state wildlife official. It was getting late, so they gave that official some directions, and marked the location with reflective flagging before heading home.

Shannon Janda is a veterinarian at Island to Island Veterinary Clinic. She said the business received a call on its after-hours emergency line, letting them know about the eagle.

“We went out there late last night and it was still there,” she said, adding that when they got it to the clinic, they gave the bird fluids and tried to make it comfortable.

Janda also took X-rays and did blood work. Luckily for the eagle, she has some experience treating birds.

“I have worked at an avian and exotic practice for a number of years, so I’m pretty familiar with working with birds, so it wasn’t too bad,” she said.

When capturing it, she said they used a towel to wrap the bird, and thick gloves to maneuver it safely into a dog crate.

Many people find such large birds intimidating, and DuBry admits it was a little disconcerting to be that close to a fully grown bald eagle.

“It opened up its wings, and it’s got a 6-foot wing span,” he said. “I didn’t know if it was going to jump up and start clawing at us. But it was pretty docile. Just kinda sat there and looked at us.”

Janda said the bird was severely dehydrated, but other that than, it’s not immediately obvious what’s wrong with it. There were no clear fractures, and nothing showed up on the tests. Janda said it could be a parasite, or the eagle may have ingested something poisonous.

She hopes the Sitka Raptor Center will be able to rehabilitate the eagle, and eventually release it.