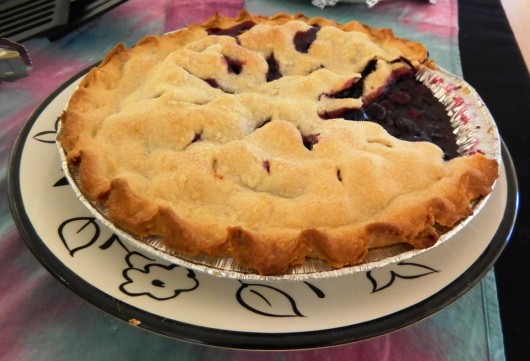 Here’s a look at some of the contest winners from the weekend’s Blueberry Arts Festival.

Evelyn Erbele took top honors in the Blueberry Dish contest with an old-fashioned blueberry pie. Cassie’s Bentley’s blueberry cheesecake took second in that competition, and a plate of blueberry turnovers by Nancy Boatwright came in third. Christie Karow got an honorable mention with her salty blueberry dish.

It’s called the Blueberry Arts Festival, so of course there’s plenty of art, including the annual juried art show, on display through the end of the month at the Arts Council’s Main Street Gallery. People’s Choice went to Selynna Parks for her “Blue Tree of Life”; Phyllis Besaw took first place with her “Ward Lake” and second place went to Deborah Stafford’s “A Few Flashy Fish.” Mimi Kotlarov’s “Lidded Basket” won a third-place ribbon.

Marilyn Lee’s “Storm Watch” received an honorable mention, and Robert Bidwell won the youth competition with his “T-rex and Smaug.”

What’s a blueberry festival without pie? And Ketchikan’s has some eager pie-eaters who 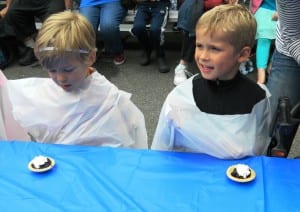 A couple of pie eaters are geared up and ready to chow down.

have finely honed their talents. In the pie eating contest, the winners in the four age categories were Laurel Dorman, Vincent Perro, Sam Weston and Alex Troutman.

Festivals need music, and for Ketchikan that mean’s the Blueberry Battle of the Bands. Of the groups that performed, two received prizes. Ego won for Best Blueberry Song, and Children of the Muskeg was awarded Best Overall Performance.

The name of the annual poetry slam just keeps getting longer every year. This year, it was the 23rd annual Richard Brautigan, Lillian Ference and Dick Whittaker Memorial Trout Fishing in America Poetry Slam and Sockeye Cinquain Contest. Rebekka Esbjornson took first place in that contest, with George Pasley coming in second. Third place went to a cruise ship visitor named Ann Marie, who left without providing a last name. 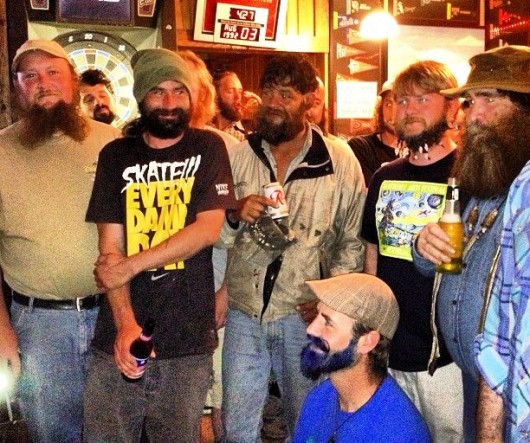 Some of the Beard and Mustache competitors show off their facial fuzz.