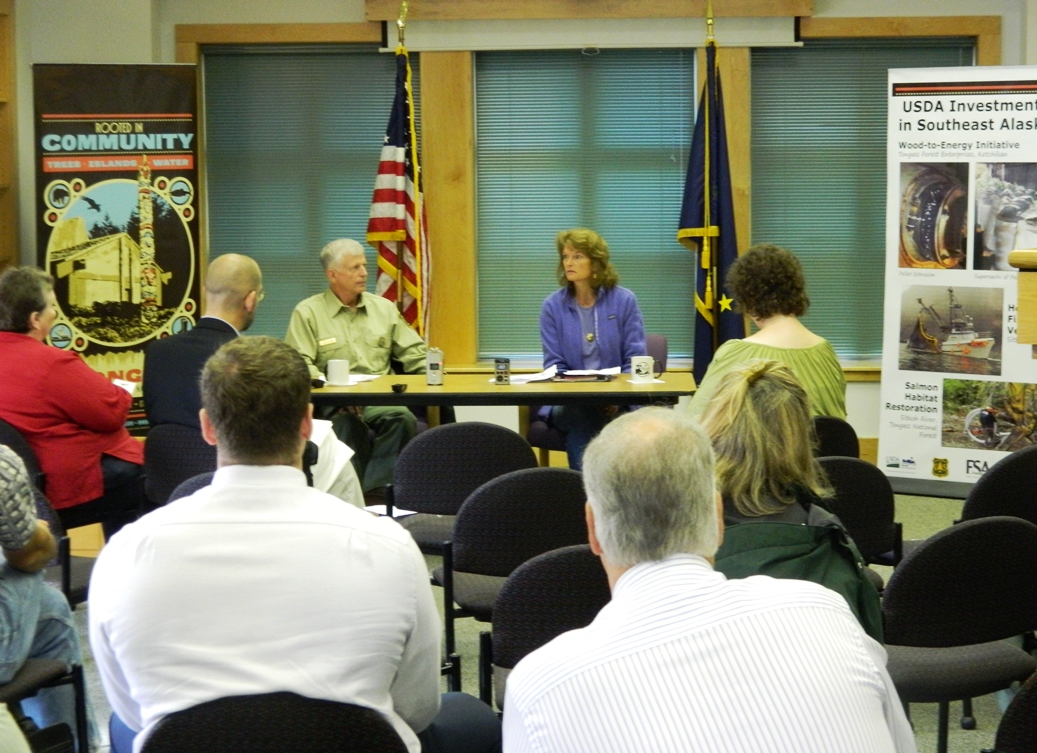 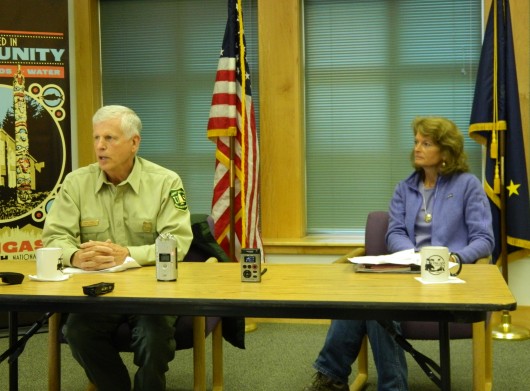 Alaskans are used to summertime visitors, and showing off our state is one of the joys of living here. Alaska Senator Lisa Murkowski has her own visitor this week, U.S. Forest Service Chief Tom Tidwell, and Murkowski has been busy showing Tidwell what the national forest means to the people who live in Southeast Alaska.

Murkowski and Tidwell sat down for a brief news conference Friday in Ketchikan to talk about what they’ve seen so far.

The Forest Service Chief has had a busy couple of days in the Tongass National Forest. He and Murkowski already visited Anan Creek near Wrangell, a second-growth harvest in Kena Cove, a commercial  thinning  of young growth in Hollis, Viking Lumber in Klawock, and met with Forest Service and timber industry officials in Ketchikan. That was just the first day. For day two, Murkowski said, “We’re going to have an opportunity to fly over the Swan-Tyee Intertie, we’re going to go over Bell Island, Lake Shelokum, Wrangell, the Stikine, Whale Pass, a couple of the timber sales … and also an opportunity to view from the air the Niblack mine site.”

The goal of the trip, for both Murkowski and Tidwell, is for the chief to learn first-hand what life is like on the Tongass.

“ The purpose of my time here is to learn and listen so that I have a better understanding of the challenges and issues that folks here on the Tongass are working on with our communities,” Tidwell said. “As great as the briefings I get, and the work that our staffs do to inform me, there’s nothing to replace actually seeing it for yourself.”

So, did Tidwell gain that insight? He said he has heard many times about, for example, the difficulty of transportation in Alaska. But seeing it for himself at the Kena Cove harvest, “really helped me have a better understanding of all the steps that it takes to make this work, and also to be able to coordinate not only the transportation, but to find way so that it’s not only economical for the sawlogs, but opportunities to make it economically viable to make use of the smaller diameter, the treetops, for biomass. It’s not as simple as just loading it on a chip truck and driving down the road to a pellet facility.”

Murkowski said she hopes this personal trip also will show the Forest Service chief how the Roadless Rule is particularly problematic in Alaska. She said roadless doesn’t mean the same thing in Alaska as it does down Down South. For example, Murkowski said, construction by helicopter just isn’t economically feasible here.

The Sealaska Land Transfer bill also came up. Murkowski is a sponsor of the Senate version of the bill, and Tidwell said that version is a document that his office strongly endorses. He said it fulfills the federal government’s commitment to the Native corporation.

“The way the lands were identified, it was based on how to not only meet the needs for the corporation, but at the same time so it works for the Tongass National Forest,” he said.

Murkowski’s bill would transfer about 70,000 acres of the Tongass National Forest to Sealaska ownership, the final transfer of land called for under the Alaska Native Claims Settlement Act. Many stakeholders have accepted the newest measure, although residents of some communities, particularly those on northern Prince of Wales Island, continue to oppose the transfer because of the likely logging activity that will take place.

Tidwell also mentioned some grants that the Forest Service recently approved for the Ketchikan Gateway Borough and the Chilkoot Indian Association in Haines. Those grants will help pay for design work on woody biomass boilers. Tidwell said that moving the projects forward, will help lead to demand for that renewable energy source.

“Once we’ve got that demand, and then you can justify creating the facility here, it’s going to create more demand because folks are going to say, ‘OK, it’s actually going to be less expensive to use biomass than it currently is,’” he said. 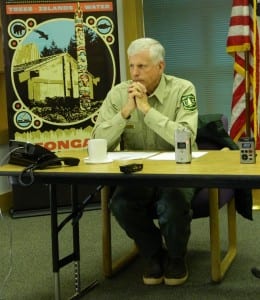 The chief was wearing a pair of new-looking Xtra-Tuf boots. He admitted they were purchased for this trip, and said they served their purpose well.

“Yesterday when we were up at Anan and walking along the boardwalk there, it was a nice, wet day in Southeast,” he said. “They did their job. Not only my feet were dry, they have great traction.”

Murkowski is visiting a number of communities in Alaska during her summer break from the Senate. Her next scheduled appearance is a speech in Anchorage on Aug. 13.