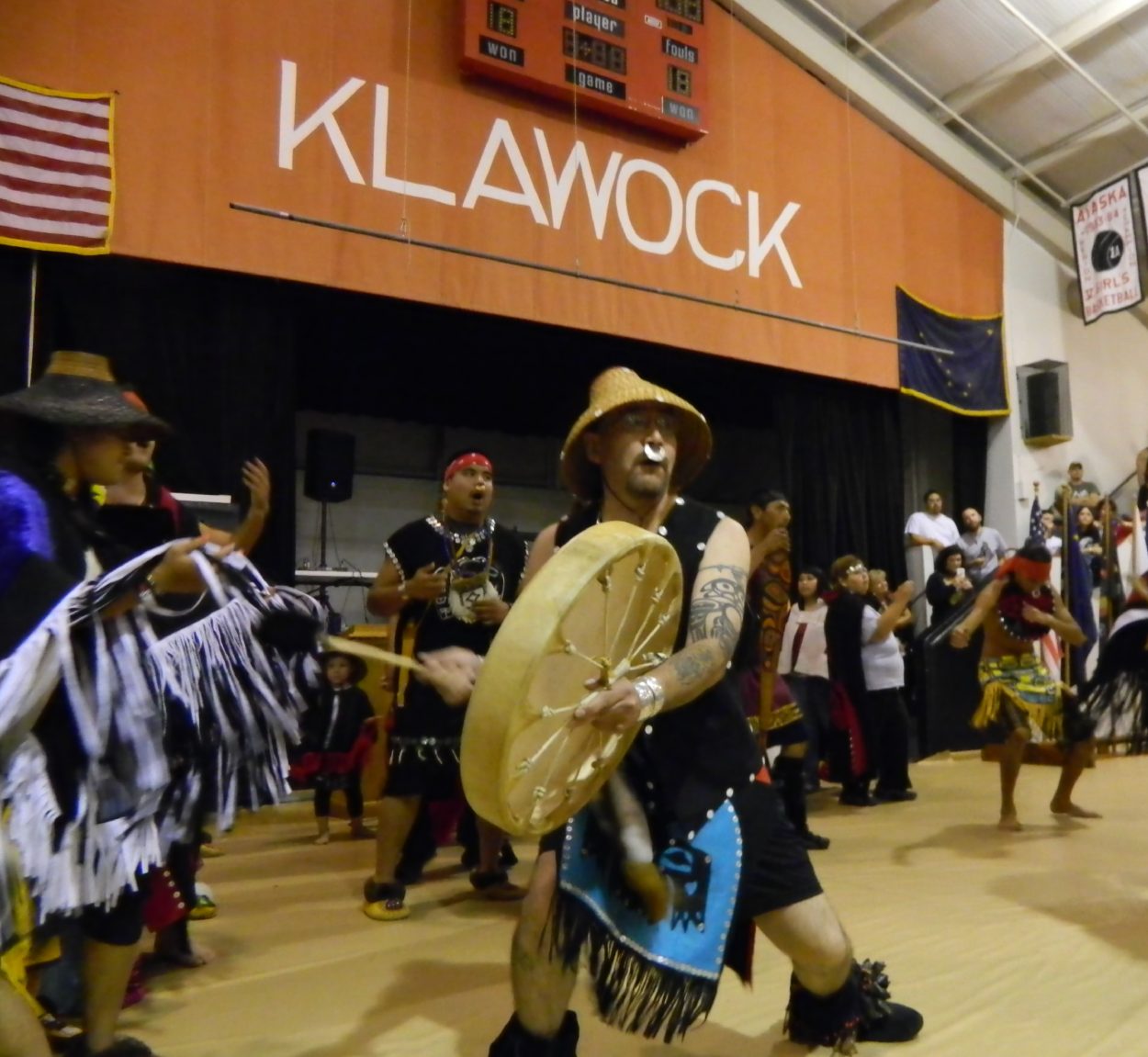 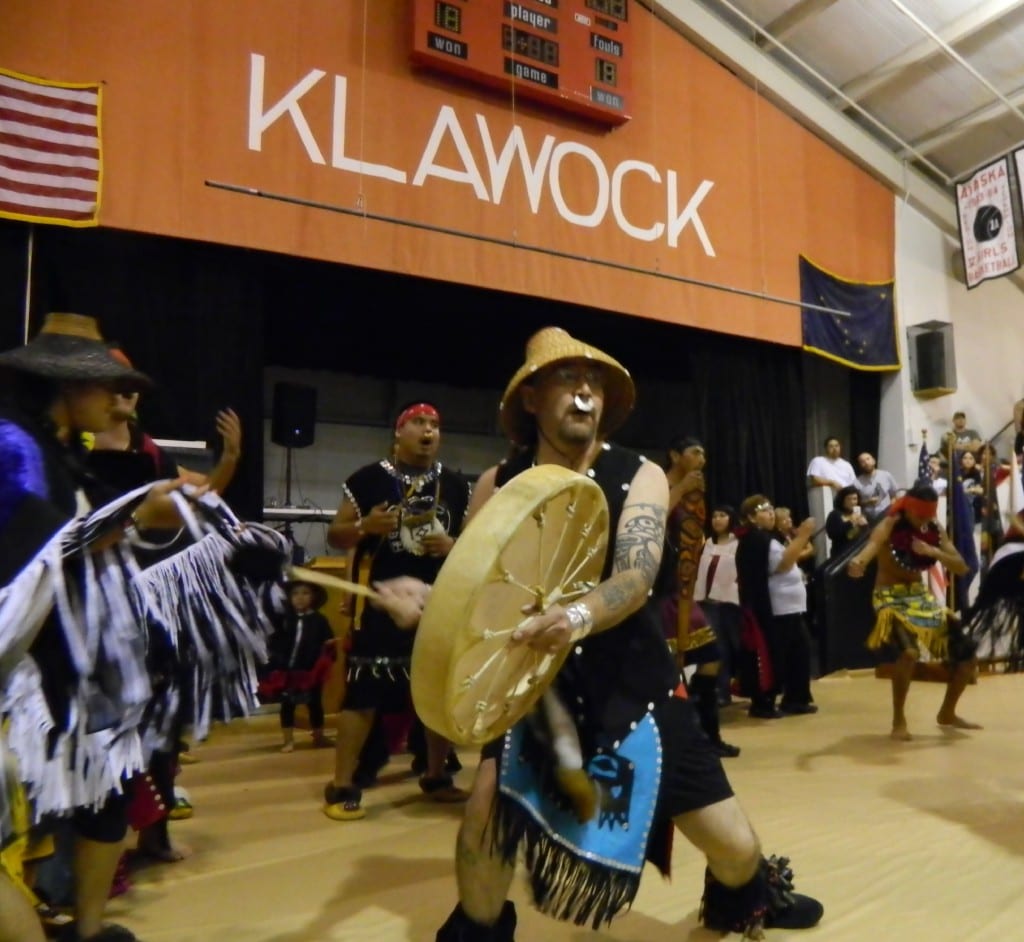 This is the sound of dozens of feet shuffling in unison. The guy you hear on the megaphone, Nick Nickerson, leads the procession from the front in an orange construction vest. And, as you will soon come to know, everything here is accompanied by music.

The feet belong to a diverse assortment of men and boys: Native or non Native, young or old, short or tall, they all work together, carrying a massive piece of cedar on their shoulders.

But this isn’t just any group of men carrying a giant piece of wood. They are participating in a three-day Tlingit ceremony that will see five totem poles raised into position in Klawock, on Prince of Wales Island. This particular totem is the Mythological Raven Pole.

It takes the group of men, followed by onlookers and a traditional Tlingit singing group, only a few minutes to carry the thousands-pound pole from the carving shed to Klawock’s Totem Park.

A large crowd has gathered in the park to watch the men hoist the pole onto a stand. They cheer when the exhausted men finish the journey.

Thankfully today, the sun is out. The same could not be said for past years or even the final day of this ceremony, during which at least a hundred people stood for hours in a drenching downpour.

The weather today is welcome, because the work isn’t done after the men carry the pole to the location. They roll it over and tie ropes to the top. And it’s then, when Nick Nickerson switches from the bullhorn to a microphone, that the real fun begins.

That banging noise you hear — wait, wait, we almost forgot. There’s music for this, too.

That banging noise you hear is a large piece of metal being hammered into the base of the totem – but what’s going on around the pole is worth explaining.

The long ropes tied around the top of the pole are stretched taught – on the other ends are groups of at least 20 people each. Under Nick’s direction, they have hoisted the pole up, and until that nail is hammered in, they are the only thing keeping the massive totem from falling over. 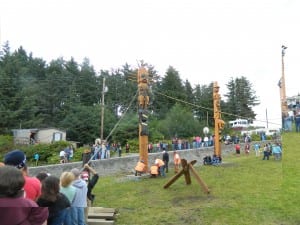 When the pole is finally bolted into place, the crowd cheers again, this time for themselves.

The carving of these poles, along with others in the Totem Park, was led by Jon Rowan, who has been working on totems since he was a child. He says, though, that he owes his knowledge and passion to other masters in the craft.

“I learned at my father’s knee, but when I really got into it was in highschool,” Rowan says. “My teacher, a master carver, introduced me to Nathan Jackson, and where I’m at today is because of them.”

The totems for this ceremony, along with others that have stood in Klawock since the 1990s, are known as “mortuary” poles, commemorating the dead. They are reproductions of original carvings from Tuxecan, an ancestral winter village of the Tlingit people. The Great Depression-era Civilian Conservation Corps had recarved the ancient poles in the 1930s, much like many of the poles found in and around Ketchikan. But due to time and age, Rowan has been charged with reproducing them again.

The carver didn’t create these beautiful totems all by himself. He was helped by a number of his students from the Klawock School, where he teaches carving.

For the past two decades, Rowan has worked with students from early grade school until they are off to college, cultivating new carvers along the way. Around the 8th grade, Rowan knows which students he wants to join him in his workshop.

“School is different. When I’m at the shop, it’s a job,” Rowan says. “Nice Mr. Rowan gets left at the door and mean Mr. Rowan is who they see. But they’re learning a good work ethic, which is what I hope.”

During the ceremony, two plaques were unveiled, one listing the names of the carvers from the 1930s, and the other for Rowan and his students.

The celebration in Klawock included more than just totems. Patrons browsed a Native arts market during the days. And each night featured a potlatch feast with food, dancing…and, well, you guessed it. Cue the music.

Hundreds of people gathered in the Klawock School gymnasium each night to dine on crab, salmon, ham, salad, asparagus, potatoes and, well, the list goes on. 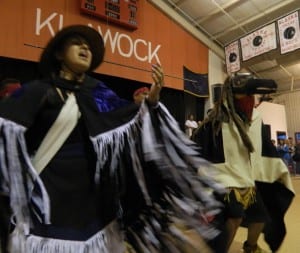 Tlingit dance groups from all around the region, including Ketchikan, entertained the crowd with songs of love and life. Devlin Andestrom dances with the group from Yakutat. The 16-year old sees the totem raising as an important uniting force for Tlingits throughout the region.

“I really feel like this pole raising is also raising up our spirit as native people,” Anderstrom says. “It’s healing for us, to be able to do something like this, for Tlingit people throughout Southeast.”

Twenty or so poles have been raised so far since the early 90s – and both Jon Rowan and others in Klawock say there are more than a hundred more to go.