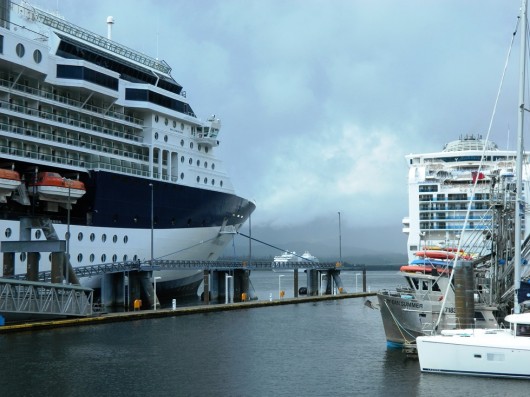 The disabled cruise ship Millennium, foreground, is tied up at Ketchikan’s downtown Berth III, while another ship that was supposed to dock there is anchored out in the Tongass Narrows. A third ship is seen at Berth IV.

Celebrity Cruises has canceled the Millennium’s sailings, and will offer full refunds to all 2,000 passengers who have been stuck in Ketchikan after mechanical problems forced the cruise ship back to port Sunday evening.

Two days after the 965-foot ship returned to port with a faulty propulsion unit, the cruise line announced via email that engineers and consultants have “been unable to find a satisfactory solution.”

Cynthia Martinez, Celebrity’s Director of Global Corporate Communications, declined to be interviewed for this story. She wrote that she can’t answer any of a long list of questions KRBD sent via email, including the exact nature of the mechanical problem, how long the ship will remain in Ketchikan, and what the cruise line plans for the ship’s crew.

She expressed regret, though, that the passengers will not have the cruise they had anticipated. To compensate for that disappointment, Celebrity will give full refunds to all the passengers, plus a voucher toward a future cruise, worth 100 percent of the cost of the cancelled trip.

The cruise line also is sending 30 guest service representatives to Ketchikan to help arrange chartered air travel for all the passengers, and provide other support.

It hasn’t been all bad for those on board. Ketchikan’s weather has cooperated for the 3,000 people – that’s passengers plus crew — aboard the Celebrity Millennium, and the city has lots of practice helping out-of-towners enjoy themselves.  Here’s Ketchikan Visitors Bureau CEO Patti Mackey: “Our visitor center staff has been trying to accommodate passengers with whatever questions they have, and that Alaska Coach Tours, the company that provides transfers for shore excursions that Celebrity offers, has also been in touch with all of the local vendors in order to provide additional options for tours and activities for the passengers.”

When the ship will leave is not clear. City Port and Harbors Director Steve Corporon referred most questions to Cruise Line Agencies of Alaska, which referred all questions to Celebrity.

Corporon did say, though, that as long as the Millennium remains at Berth III, other ships that had been scheduled for that dock space will have to anchor in Tongass Narrows and lighter passengers to shore.

Mackey said she hopes all the players will come up with a plan.

“Today, it’s a light day, so that gives them some options, but tomorrow through the rest of the week, we’ve got four, five, six ships a day coming in, all of which need a place to tie up,” she said.

Corporon said he hopes it won’t be more than a couple of days before the Millennium can move.

The Millennium had similar propulsion problems earlier this month, and was stuck in Seward for three days for repairs. The ship had to cancel its next sailing, and passengers on that voyage also received refunds and credit toward a future cruise.

The Millennium’s stranded passengers are expected to start flying out of Ketchikan on Wednesday.