This fall, City of Ketchikan voters will decide whether to accept up to $43 million of new debt to pay for renovations at the city-owned hospital building, which is run by PeaceHealth. Advocates say the bonds will be paid through existing taxes, and that the renovations are badly needed.

Hospital and city representatives talked about the project during this week’s Ketchikan Chamber of Commerce lunch.

The first phase of Ketchikan Medical Center’s planned renovation will cost $62 million. And, if the bond measure passes, the vast majority of those funds will come from locally collected taxes.

But, not new taxes. City officials say the existing 1 percent hospital sales tax – which is designated for health care in general – will cover that 30-year debt payment.

And what will all that pay for? A large part of the plan is to upgrade the 50-year-old surgery area. Ken Tonjes, chief administrative officer for PeaceHealth Ketchikan Medical Center, led Wednesday’s presentation. He asked longtime local doctor David Johnson to talk about his experience in the surgery part of the hospital. 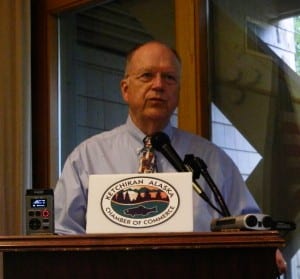 Johnson described a typical operation when he arrived in the 1970s, which involved very little in the way of electronic equipment.

“Fast-forward 47 years, and by the time you have monitors for the anesthesia machine, monitors for the procedure being done… so you’re going from a very uncrowded room to one that is so tightly crowded that you pretty much have to choose where you’re going to stand during the procedure and then stay right there because you can’t move without contaminating the surgical field,” he said.

Phase 1 of the hospital project also adds parking, and will double the space available at the clinic next door, also run by PeaceHealth. Tonjes said the existing clinic doesn’t have enough exam rooms, and very little office space for doctors.

He stressed that the project isn’t about coddling physicians, but it’s important for the hospital to be able to attract new doctors to Ketchikan. To address that issue, he invited up Dr. Peter Rice, who told a story.

“About four years ago, we had a … candidate who toured our clinic, and I was a little offended because she looked around the clinic and said, ‘I don’t see how you could ever recruit anyone to work in this clinic,’” he said. “It’s the only place I ever worked. It doesn’t seem that bad to me.”

Tonjes also talked a little about the economic benefits of providing up-to-date health care. He said that when local businesses hire from Outside, they often are asked about the health care opportunities in the area.

“Hospital sales tax fund really can cover it,” he said. “We have $3.7 million in reserves right 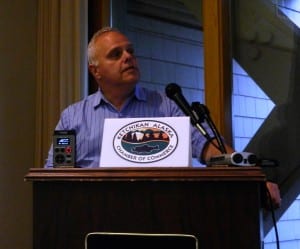 Mayor Lew Williams III looks up at a slide projection as he speaks during Chamber lunch on Wednesday.

now. In the first four years, we’ll pay $1.5 million toward the bonds. Then the bonds for the last one you voted for … pays off in 2017, and we’ll roll that into the payment, and it’ll be about $2.5 million from then on until it’s paid off.”

That last bond he mentioned paid for hospital improvements about 13 years ago.

Williams said the city government is frugal, and wouldn’t push for this project if it weren’t right for the community.

“Our management is one of the most conservative there is, even though Karl (Amylon), our city manager, I still think is a socialist,” he joked. “We argue about things, but he doesn’t like to spend money and I like that. Don’t anyone tell him that, please.”

After the presentation, there were some comments and questions from the audience. Saxman Mayor Joe Williams, who also is on the hospital foundation board, said the entire borough should be involved in paying for the renovations. Another audience member pointed out that everyone will pay for it through the city’s sales tax, including all the summertime tourists.

The question of an urgent care facility came up, and Tonjes said there isn’t really enough demand in Ketchikan to provide a 24-hour clinic. To address some of that need, the hospital’s clinic is offering extended hours, and once the expansion is complete, there will be additional opportunities for that kind of service. However, for late-night medical needs, the emergency room will continue to be the only option.

To close the presentation, Dr. Johnson says he hopes that some kind of symbolic groundbreaking for the renovation project can take place on Oct. 13, which will be the 50th anniversary of the current hospital building.

The local election is October 1.