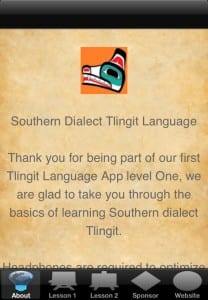 An app developer on Prince of Wales Island has launched his newest app for smartphones, with the goal of encouraging more people to learn the Tlingit language. The free download is the first of three planned apps based on the southern Tlingit dialect, and is the start of what he hopes will be a series of applications.

Simon Roberts wants to help preserve Northwest Coast indigenous languages, starting with his own. And he’s using modern technology to achieve his goal.

Roberts is Tlingit, and lives in Klawock, a village on Prince of Wales Island. He started his new technological adventure about a year ago, looking into app development for smartphones and tablets.

“My primary focus when I got into app developing, to learn it, was to get the language out there,” he said. “I’d seen that the southern … Haidas had their own app out there on the android, and I was a little shocked that I didn’t see anything on there for Tlingit.”

As Roberts learned to develop apps, he turned it into a business, and got a little sidetracked from his original goal. He got back on that track recently, and approached some nonprofit agencies, to see whether funding were available.

That didn’t work out, so Roberts reached out to regional business owners instead, and had more luck. A Juneau-based financial management company agreed to sponsor the first Tlingit language app in exchange for some advertising within the application.

That app has been available for a few weeks already for android smartphones, and just 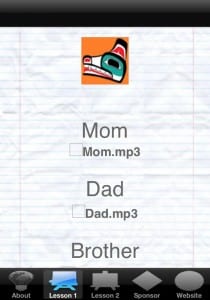 recently was published as an iPhone app. Both are free downloads.

“With this app here, it’s based on the southern dialect of the Tlingit language,” he said. “I’ve been working with my grandmother, Alicia Roberts. She’s well known in the community. Most people know her for the Alicia Roberts Medical Center.”

His grandmother lent her knowledge of the language, as well as her voice to the app.

Roberts said he talked with a language teacher, who told him that method is the best for teaching beginners. This first app is one of three. The second, sponsored by a Ketchikan business owner, will kick up the teaching a notch. And the third, which has the support of a Prince of Wales Island business, will build on the lessons of the first two, helping students learn complete phrases.

Level 2 should be out by the end of September, with level three done about a month later. After that, Roberts plans to start work on apps teaching other regional Native languages.

“For the (northern) Haida language, I’ve been networking with Ben Young,” he said. “Every Haida I spoke with has pointed me toward him as the best in speaking the Haida language.”

Roberts hasn’t yet confirmed who will help him create a Tsimshian language app, but he has some promising leads.

In each case, he hopes to increase interest and awareness, and inspire others to learn languages spoken by the region’s first people.

To find the app for android or iPhones, search for Southern Tlingit 1. For more information about Roberts, visit http://www.zimonzayz.com