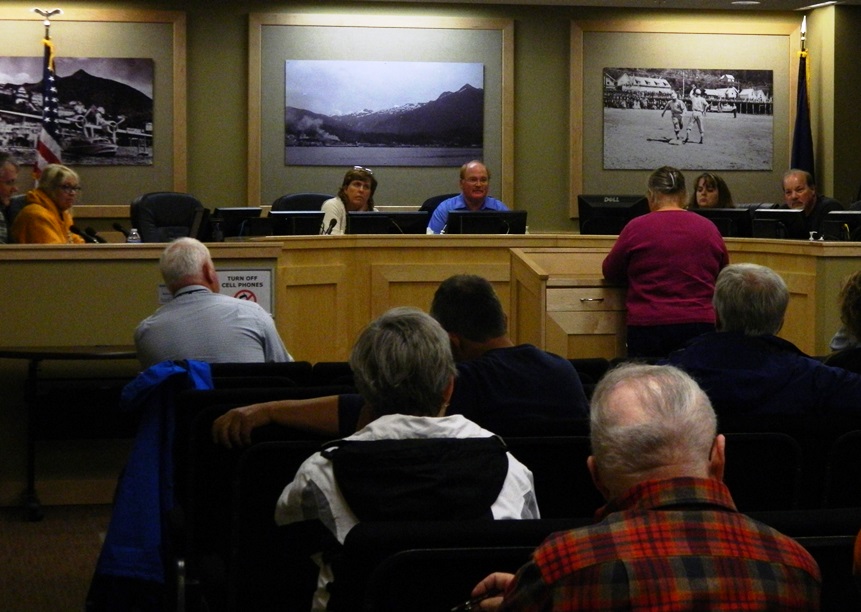 The joint Cooperative Relations Committee between the Ketchikan City Council and Borough Assembly heard extensive public comment at its regular meeting Friday. Much of that comment period related to the ongoing debate over how the Ketchikan Public Library is funded.

Lisa Pearson is the adult services librarian at that library.

“I cannot ask people when they walk in the door, ‘where do you live?'” Pearson told the Committee.

Pearson was one of many former and current library staff who spoke at a lunchtime meeting of the Cooperative Relations Committee in Borough Assembly chambers. She and others pushed back against an Assembly request to track where exactly visitors to the Ketchikan Public Library live, citing privacy and other ethical concerns.

So why does Assembly want to track those people? It all stems from the debate surrounding how the new Ketchikan Public Library on Copper Ridge receives funding from both the city and the borough.

The borough has traditionally contributed to the operating budget of the library, which includes the day to day operations of that facility. When the City Council passed a resolution earlier this year requesting $420,000 from the borough, the Assembly pushed back. The borough government requested that the library track just who uses the facility; in the spirit of fairness, the Assembly says, the amounts paid by both governments should reflect the respective usage by their citizens.

Agnes Moran, who serves on the Borough Assembly but spoke at the committee meeting as a citizen, defended borough residents who live outside of city limits.

“As a borough resident I’m pretty tired of being told that I’m not paying my fair share for services,” Moran said. “I really feel, and I’ve talked to my neighbors, that it’s time for that to stop. We do pay our fair share.”

Moran cites both the sales tax and non-areawide service fee as evidence.

Citizen comments took up the majority of the hour-long meeting. Borough Manager Dan Bockhorst urged that citizens and politicians keep the debate over the library civil, as harsh words only make the problem worse.

The Committee took no formal action during the meeting, though Bockhorst and City Manager Karl Amylon agreed to speak on the matter. Discussion of the issue was moved to the next meeting of the Cooperative Relations Committee on October 11 in City Council Chambers.

Amylon did warn the body, though, that if an agreement on funding could not be made soon, there would be consequences.

“The bottom line is that if we can’t give the borough the information that it desires, and the borough withholds operating assistance, services at the library are going to be reduced for the community as a whole,” he said.

Amylon told the committee that he will begin working on the city budget for 2014 in the next few weeks.

Room for actual discussion between the committee members was constrained because of the extensive comments made by the public on the issue. One issue raised by committee members, which seemed to receive broad support, was consolidation of the borough and city governments.

“If we had one government, none of this would be happening,” Philips said. “We’d have no finger pointing or anything. I think maybe down the road this is maybe something we need to look at. Because the amount of staff hours, time and finger pointing is basically a waste of time and nothing is getting done.”

The issue of consolidating the city and borough has come before voters numerous times over the past few years. And each time it was rejected.