This year’s Alaska cruise-ship season has ended. Close to a million passengers sailed through Southeast this summer, with many traveling on to points north and west.

It was a good summer pretty much everywhere in Southeast Alaska. So, we all should have good memories of the season. Right?

“Our days are usually better on the crummy days, believe it or not,” says Thyes Shaub, a jewelry designer who’s part of the Juneau Artist Gallery.

Thyes Shaub shows some of her jewelry at the Juneau Artist Gallery, a cooperative store in the capital city’s tourist district. (Ed Schoenfeld/CoastAlaska News)

The retired lobbyist is one of about two dozen painters, carvers, print-makers, photographers and potters who run the store as a co-operative.

Her family is also in the flight-seeing business, so she knows warm and sunny skies bring in more of those customers. But when it rains, it’s better in the gallery.

“So they’re wandering around town. And all the shops in the downtown area kind of benefit ‘cause they’ve got money to burn,” she says.

The gallery is one of hundreds of businesses around Alaska catering to summer tourists.

“I would say for the 30,000 to 40,000 Alaskans like myself that depend on the visitor industry for our livelihood, it was a good season,” says John Binkley, whose family run paddlewheel riverboat and gold-mine tours out of Fairbanks.

“We finally pulled back from a low point here a few years ago to the million-visitor mark on the cruise side. And although we’re not quite back to where the peak was, we’re headed in that direction now,” he says. (Read a report from the start of the season.)

I think everybody’s into the new economy. It’s the new norm and if we’re going to go on vacation we might as well just go and do it,” says Jeannie McFarland, vice president of the Prince of Wales Island Chamber of Commerce. She and her husband also own McFarland’s Floatel, a lodge near Thorne Bay.

Small-town lodges and other off-the-beaten-path attractions cater mostly to independent travelers. Most larger businesses depend on those aboard cruise ships.

This year’s projected million-passenger mark was expected to be the best since 2009, before politics and the recession brought them down.

Binkley says a couple of late-season factors made the total lower.

“We lost a few ports of call due to weather. And also there were some mechanical problems with one of the ships and a couple of the actual cruises were cancelled near the end of the season,” he says. 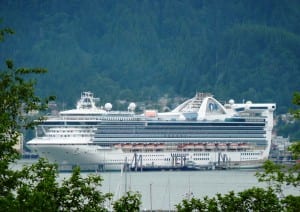 The cruise ship Golden Princess docks in Juneau in June. It was one of 28 large ships sailing the Inside Passage this season. (Ed Schoenfeld/CoastAlaska News)

But still, it was a good year. And that’s part of a trend.

She says next season will be a bit different.

“In 2014, the number of cruise ship passengers visiting the region actually might be slightly lower than it is this year by 23,000 passengers. And that’s because two Princess ships will be redeployed and replaced by a very small amount of less capacity,” she says.

“They’ve been working under the assumption that the emission control area, which requires them to burn very expensive fuel, would be in effect. And that influenced their decisions to move ships to other locations,” he says.

Carnival and some other cruise lines have won waivers from those rules in exchange for installing new emissions control equipment.

But that happened after schedules were set. So any change won’t hit Alaska til 2015.

Some in the industry expect more growth in future years, pushing numbers to new highs above the million-passenger mark. A question is: how much will tourists be willing to spend?

“We definitely noticed that trend of people spending less money and being careful and watching for things that are on sale,” says Juneau Artist Gallery member Thyes Shaub.

“I think that maybe a few more people are spending a little bit more. But I think they’re still being pretty careful with their money. We’re still seeing a lot of people that come and pay cash. I think that people decide this is the amount I’m going to spend on my trip and when that’s gone out of my little satchel, I’m done,” she says.

The large cruise lines sailed 28 ships to Alaska ports this year, one more than in 2012. Together, they made close to 500 separate voyages.