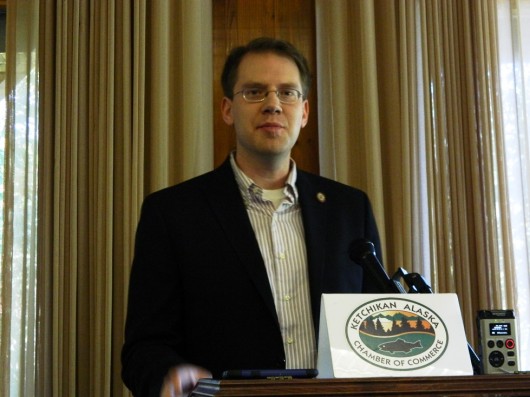 House Majority Leader Lance Pruitt visited Ketchikan for the first time last week, and managed to be here for those two sunny days. He spent some time touring the island, and spoke to some local organizations, including the Greater Ketchikan Chamber of Commerce.

Pruitt is a lifelong Alaskan, but he hasn’t made it to many places in Southeast. Other than Juneau, he’s been to Haines, and stopped briefly at the airport in Sitka. He said his visit to Ketchikan was enlightening.

“I really didn’t know that there was all this industry going on down here,” he said. “You’ve got some of the old facilities that you guys are investing in, the aquaculture, the mariculture down here.”

The Anchorage Republican said that seeing Ketchikan and its economic needs first-hand could help him when he’s making decisions in future legislative sessions.

“When I’m looking through that piece of paper — well, hundred pages – knowing that there are certain priorities down here, I’ll probably be more inclined to go to thos individuals that represent the area and say … I saw this was a priority because it’s going to provide jobs, and I’ll be more inclined to ask them why or why not were these included,” he said.

Sites Pruitt visited include the Southern Southeast Alaska Technical Education Center, the shipyard and Ward Cove, where he learned about OceansAlaska’s work to provide seed for Alaska shellfish farmers. He said that industry has great potential for growth, and Southeast should take the initiative to attract more mariculture business to the region. He noted that Texas had success with a different kind of industry.

“When Colorado chose to – they made some laws that affected gun manufacturers in their state – Texas offered up Texas,” he said. “The way they were able to get the manufacturers to move down there was actually to have the highest leadership go to those companies and say come down. In turn, they actually have two or three manufacturers that are moving to Texas.”

Pruitt said that with ocean acidification causing problems for oyster seed growers Down South, it would be prudent to let them know what Southeast has to offer. After all, he said, if they have to move anyway, why not here?

Pruitt also was asked about the Ketchikan Gateway Borough’s proposal that the state fully fund basic education, rather than require a local contribution. He said that while the funding may be welcome, it might come with some less-welcome consequences.

“I think the long-range discussion that would come into it is if we start taking over more funding, wouldn’t the argument also be that the state should take over more of the administration and operation of that money,” he said.

During his presentation to the Chamber, Pruitt talked primarily about the oil tax reform bill that the Legislature approved last session. He said the bill is an important next step in the state’s evolving tax structure, and will help encourage the oil industry to invest in Alaska.

Pruitt predicts that some of the next big topics likely will be the proposed natural gas pipeline, workman’s compensation and the state’s laws regarding domestic violence and sex crimes.

“As a state, we are known outside of Alaska as the number one place to go if you’re a sex offender,” he said. “I couldn’t figure out why that was the case. That disturbed me. I’ve come to understand a couple of things that we’re working on that potentially can scale some of that back. It comes down to the ease of being able to come up here and disappear into the crowd.”

Pruitt said that while people should have an opportunity to start over, that opportunity shouldn’t come at the expense of a community’s peace of mind.