The hospital bond proposition passed, city voters replaced one City Council member and a high school senior has been elected to the Ketchikan School Board.

With that approval, the city can move forward with the $62 million first phase of renovations. That is the most expensive phase, and will upgrade the city-owned hospital’s 50-year-old surgery suite.

The renovations also will double clinic space, and add parking. The second phase of the project would expand the emergency room and lab areas, and would change the main entrance to where the emergency entrance now sits. That second phase is estimated to cost an additional $14 million. 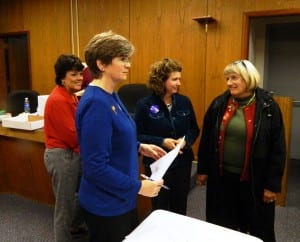 City and borough clerks talk with poll workers as precinct results are dropped off Tuesday night at City Council chambers.

City voters also apparently chose a new Council member. Political newcomer Judy Zenge won the most votes, according to the unofficial results, with 922 choosing her. She said she pleased and humbled.

“I’m just excited to get to work,” she said. “I can’t wait to start working the budget, actually. I’m excited to work with all the Councilmen and woman, and it’s just a little overwhelming at the moment.”

Incumbent Matt Olsen came in second with 810 votes, and incumbent Dick Coose apparently lost his seat with 644 votes. Olsen said it’s an honor to be elected.

“In terms of what we hope to accomplish, I really just hope to continue with long-term planning for the community so we can look forward to having our community return to the vibrant past that we had,” he said. “I know we can get there, it’s just going to take some work and some time.”

Boroughwide, the two incumbents on the Borough Assembly kept their seats. Bill Rotecki was the top vote-getter, with 1,415 votes. He said he is a good listener, and he hopes to continue using that ability to represent everyone’s interests on the Assembly.

Alan Bailey came in second, with 1,309 votes. He said he wants to continue working to create a business-friendly environment.

“That’s the kind of this I think is really important,” he said. “We have a lot of issues ahead of us, and it just takes a lot of time and studying, and I have the willingness and enthusiasm to do the studying. I’m just really grateful to the community for giving me this chance.”

Challenger John Harrington followed with 1,190 votes. Harrington is a former Assembly and School Board member.

Speaking of the School Board, incumbent Dave Timmerman kept his seat and received the most votes, 1,456. He said he appreciates the support and will continue his spirited defense of School Board priorities.

“I’m gonna continue to keep my eye on the borough and continue to fight for the proper amount of money that the School Board thinks we should get,” he said, adding that he will “keep concentrating on the activities action. I think everyone knows I’m pretty passionate about that.”

“The first couple meetings, I’m going to sit back and see what it’s like sitting up at the table and get a feel for everything,” he said. “I’m definitely not going to be quiet. I’m not good at that. I have a lot of questions.”

Political newcomer Camille Booth was third in the School Board race, with 1,029 votes.

A ballot proposition that would have created a new Saxman-South Tongass fire and EMS service area failed in Saxman and passed in the South Tongass area. It had to pass in both areas in order to move forward, though.

That proposition was a potential solution to the ongoing issue of how Saxman can pay for South Tongass fire service. Officials have said that they will try to negotiate a new fire service agreement. But if that doesn’t work, they’ll consider options, including cutting off that service for Saxman.

NOTE: This story has been updated from its original version to reflect the Canvass Board results.