The Ketchikan Shipyard, operated by Alaska Ship & Drydock, is one of the more visible parts of Southeast’s “blue economy.” (Ed Schoenfeld/CoastAlaska News)

Southeast Alaska’s maritime economy provides more than a quarter of the wages paid in the region. That’s according to a new study published by the Southeast Conference.

He’s biased, since his Portland-headquartered company owns Alaska Ship and Drydock. He elabarated during a speech celebrating last spring’s opening of a new ship-construction hall.

“After the collapse of the timber economy here, these leaders saw an opportunity for growth and jobs and economic prosperity, while others saw only derelict infrastructure and a dying industry,” he said. (Watch a time-lapse video of the hall’s construction.)

A new study shows the shipyard is a key contributor to the region, with about 120 employees and $37 million in annual revenues. It’s part of Southeast’s maritime or “blue” economy. (Click here to read the report.)

“So who are we. What sets us apart from other places and makes our resources unique. Is there one thing that defines our people, geography and economy?” asked Meilani Schijvens, who researched that question as part of Juneau-based Sheinberg Associates.

She spoke at last month’s Southeast Conference annual meeting in Sitka, where the study was released.

“We are here today to tell you that there is. We are a maritime economy and a maritime region,” she said.

That’s no surprise, given Southeast’s geography.

But the study has the details to prove it. The report shows about 400 maritime businesses and government agencies employing more than 8,000 people. Their total annual wages come close to half a billion dollars, with individual wages averaging about $50,000 a year.

Researcher Barb Sheinberg says this is the first thorough study of the blue economy. It includes commercial fisheries, ferries and marinas.

“That’s our seafood processors and commercial fishermen, the mariculture workers, that’s where half of the maritime jobs and wages are,” she said.

Sheinberg says the blue economy is larger than mining, timber, construction or any other sector in Southeast.

Schijvens says shipbuilding and repair jobs have doubled over the past five years.

“This growth is not accidental, but resulted from strategic planning and targeted investment,” she said. 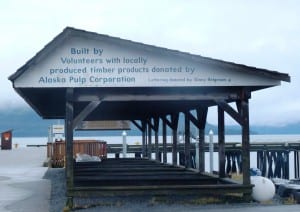 A shelter on Wrangell’s waterfront harks back to the days when timber was king. (Ed Schoenfeld/CoastAlaska News)

State and federal grants, as well as private investments, have paid for seafood plant improvements, a marine service center, a travel lift and a new harbor.

“Now we have transient moorage space. So now we’re seeing yachts coming to Wrangell, because before, we never had that ability,” she said. “Commercial fleets were being rafted 3 or 4 deep. Well, the yachts don’t want to tie up to the commercial boats. But now we’re seeing this huge increase of yachters coming to Wrangell. It’s added an extra element to our tourism industry.”

She says growth hasn’t been easy. Grants take years. Community planning can be contentious. And it’s natural for people to become impatient.

“Recovery is very slow, as you are all are very painfully aware of. It has taken 20 years for our community to start rebounding,” she said.

Wrangell isn’t all the way there. It still hopes to see development at the sites of its old mill and a former Bureau of Indian Affairs school.

Rushmore says that could include expansion of the city’s blue economy.