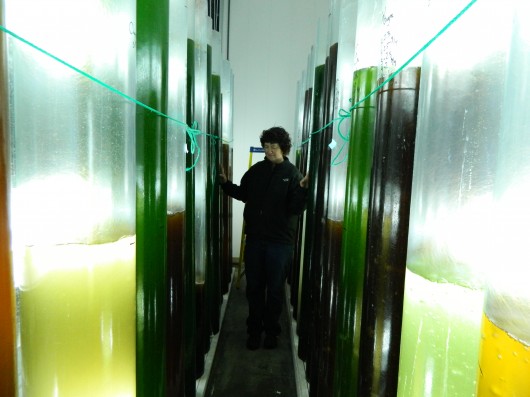 Mariculture could be the next big thing in Southeast Alaska, and a Ketchikan nonprofit organization hopes to take the first steps toward making that happen.

There already are shellfish farmers in Alaska, including some on the far side of Prince of Wales Island. For the past couple of years, OceansAlaska has worked to provide the necessary seed to keep them in business.

The seed is basically baby oysters. Oysters can’t develop to that stage here because the water is too cold, so the larvae has to be grown in a facility, until the teeny oysters are big enough to be planted at a shellfish farm.

Barbara Morgan grows the algae to feed those baby oysters at OceansAlaska. She talked to the Ketchikan Chamber of Commerce this week, and explained some of the issues facing the mariculture industry, and what OceansAlaska has done to help.

The biggest problem is a shortage of shellfish seed.

This Oceans Alaska photo shows oyster seed, spat, after it has set.

A big reason for the seed shortage is ocean acidification, which affects the ability of producers in Puget Sound to grow viable oyster seed. Simply stated, acidic water makes it too difficult for developing oysters to grow a shell, so they die.

Alaska’s ocean doesn’t have that problem, though, and Morgan said that’s a potentially huge opportunity.

“We don’t have those natural upwellings pulling up that more acidic water in this area, we don’t have those ocean acidification problems,” she said. “So that opens a door for Ketchikan to be the hub of the mariculture industry.”

Morgan said Puget Sound producers are considering building new facilities, and while many are looking into Hawaii, they also are watching OceansAlaska closely, to see what kind of success it has here in the next few years.

OceansAlaska has a small floating production facility, and is looking for state and federal funding to build a larger shoreline operation at its property off South Tongass Highway.

Morgan said the larger facility would allow them to produce ten times the seed they currently grow, although that still wouldn’t keep up with the demand for that growing industry.