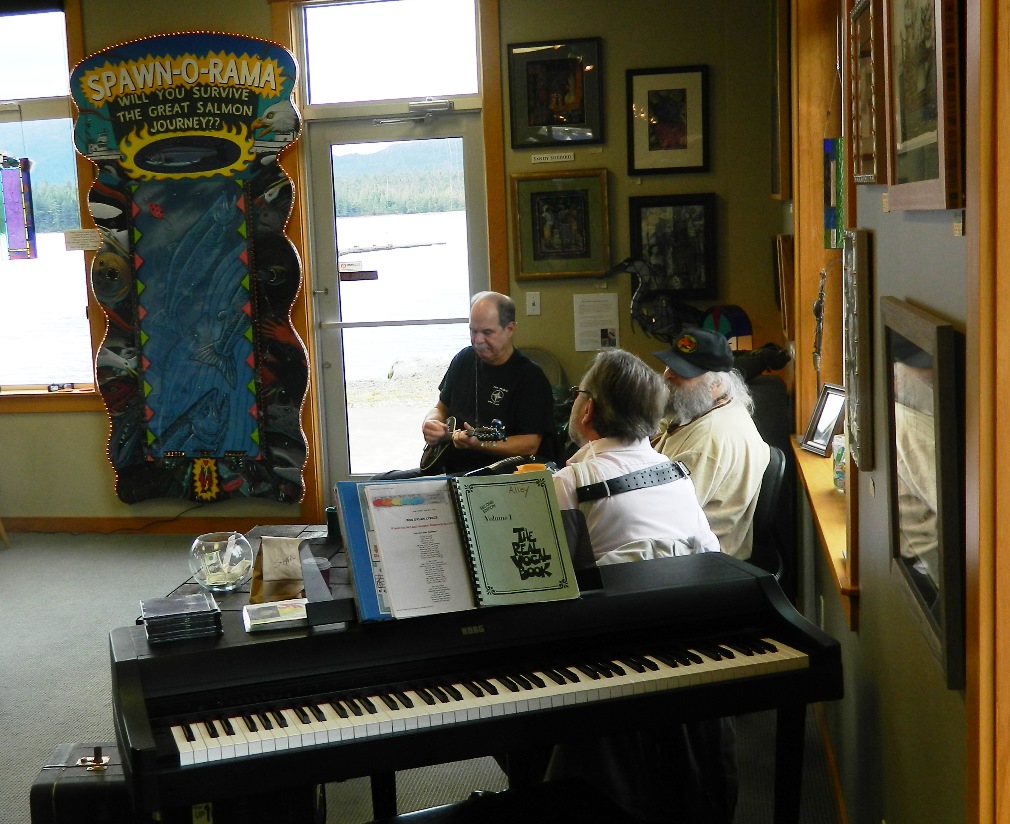 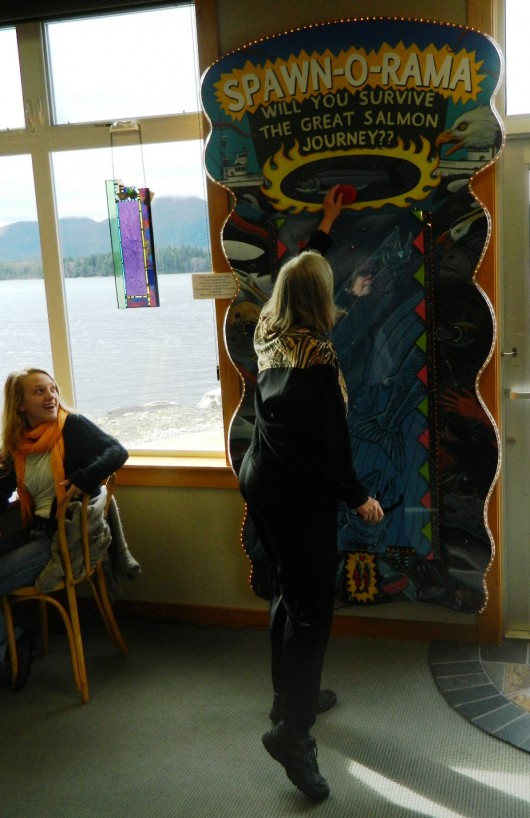 A customer at The Point tries out the new Spawn-O-Rama game Friday.

If you hear a foghorn, that means you’ve lost. Like the vast majority of the salmon hatched each year, you have fallen victim to one of the hundred or so predators that depend on salmon for food.

That’s the message of Spawn-O-Rama. And considering that it’s about fish, it’s probably not a surprise to any who know him that Ray Troll is involved. He and another Ketchikan artist, Terry Pyles, collaborated to complete the game, which is destined for the “Salmon Connection” display at the Sitka Sound Science Center.

But, Ketchikan residents had a few days to try out the game first. It was on display at The Point art gallery and restaurant. With The Point Band playing in the background, the two artists talked about the project. Troll explained that it all started with a grant submitted by Lisa Busch, the Sitka Sound Science Center director.

“Lisa wrote the grant to the National Science Foundation, and NSF likes to do outreach,” 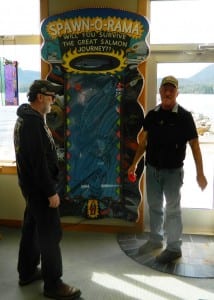 Ray Troll and Terry Pyles encourage people to try out their Spawn-O-Rama game Friday at The Point.

he said. “So, basically, this is an outreach grant to get the public engaged, and make science fun.”

In a telephone interview later, Busch said the point of the Salmon Connection exhibit is to help the average person make the connection between healthy oceans and healthy salmon fisheries.

The game is one of many displays, including lots of artwork by, again, Ray Troll. In addition, Busch said, “We have a brand-new tank, that has a little pop up, so there’s salmon in the tank, so kids and people who don’t have bad knees can go underneath and pop up and see the salmon swimming around their head.”

The center also commissioned a video about salmon, and the human connection to the fish. While the exhibit has been open since summer, the video and the Spawn-O-Rama game will debut on Nov. 1, as part of the Sitka Whale Fest.

Busch said it was a lot of fun planning the exhibit, and she’s happy that it includes plenty of artwork.

“What I think a lot of people don’t realize is that there is a lot of creativity involved in actual science,” she said. “There’s a lot of inspiration, and imagination and creativity that’s used in science. Using art as a venue for expressing scientific ideas, seems to me to be a natural.”

The exhibit is based on the work of University of Washington Fisheries scientist Dr. Daniel Schindler, who sent some of his students up to be part of a committee that worked on the project. Troll said he’s not usually fond of working with committees, but this one wasn’t so bad.

“We ‘spawned’ – sorry — this idea of doing this Plinko-style game,” he said.

Troll recruited Pyles after the committee decided on the game. Troll said he could handle the painting part, but he needed an additional skill set.

“You don’t want Ray Troll running power tools,” he said. “It’s not pretty folks. Terry Pyles is a different kind of artist, but we share much in common.”

Pyles has created his share of marine-based art, as well. While the artists know a lot about fish, they aren’t really experts on building games. So, they went online and researched Plinko games to figure out how to make it work.

For those who aren’t familiar with Plinko, the upright board has a grid of evenly spaced pegs behind a piece of Plexiglas, and a player drops a puck into an opening at the top. The puck bounces along the pegs as gravity pulls it down, and it exits at the bottom. One of the three bottom openings is the winning “spawn” location.

Pyles said there are about 130 different animals that depend on wild salmon for their livelihood.

“So we’ve put a fraction of those critters around the spawning salmon that are trying to swim up the stream there,” he said. “The idea with Plinko is that is kind of resembles the escapement for spawning fish. You only get a small percentage of winners, and the rest get eaten.” 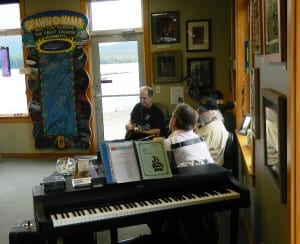 The Point Band plays lively tunes with Spawn-O-Rama in the background.

There’s also a can of salmon at the bottom, called “Plinko Pinko” salmon, because Troll really can’t resist a pun.

The lunch crowd at The Point was full of people interested in the game, and quite a few stepped to up try their luck as members of The Point Band played a special spawning song.

Accompanied by Troll, the game leaves Ketchikan on the ferry Tuesday.