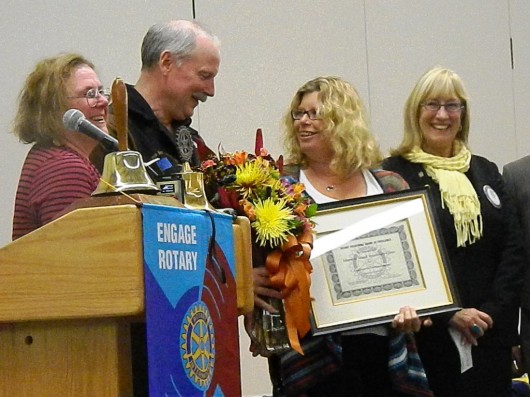 The U.S. Coast Guard and Island to Island Veterinary Clinic were honored Wednesday during a joint Rotary/Chamber of Commerce luncheon. 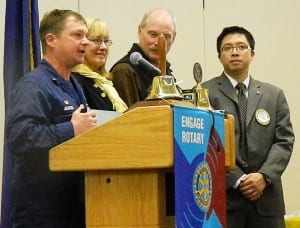 He added that, “A month ago, 18 of the individuals from the base cleaned the road from the CG base down to Rotary Beach, members of the base are involved with the education of our children. They frequently are in our schools, reading books, helping our kids with math and reading.”

Base Commander Jack Jackson and some of his crew were on hand for the ceremony. He said it’s a great opportunity for all the local Coast Guard members to live in Ketchikan, and that it’s an honor to accept the award.

Heather Muench of the Ketchikan Humane Society introduced the Excellence in Entrepreneurism Award, which went to Dr. Marna Hall of Island to Island. Hall, who was surprised by the award, teared up as Muench read the letter of nomination.

Muench noted Hall’s service to Prince of Wales Island in addition to her clinic in Ketchikan, as well as a special fund Hall started for expensive care that some pet owners might not be able to afford.

“Dr. Hall also saw the need to prevent the high number of animals being euthanized in Ketchikan, by offering her services to the Ketchikan Humane Society at a reduced rate for our low-cost spay and neuter feral cat program,” Muench said. “Her willingness to help has had a great impact on this community. In the first eight months of 2012, 235 animals were euthanized by the Ketchikan Gateway Borough, compared to just 88 during the same time period this year.”

With rousing applause in the background, Hall said owning her own clinic has been a longtime dream.

“I just wish my husband was here. That’s the part that makes me sad,” she said. “I mean, he is dealing with a 40-plus year-old lady who is premenopausal, who decided to take on 12 women and start a veterinary clinic. That man needs an award.”

Sen. Bert Stedman was the keynote speaker for Wednesday’s lunch, and he talked about the importance of capitalism. Tune in to KRBD’s Thursday Evening Report for highlights from his comments.