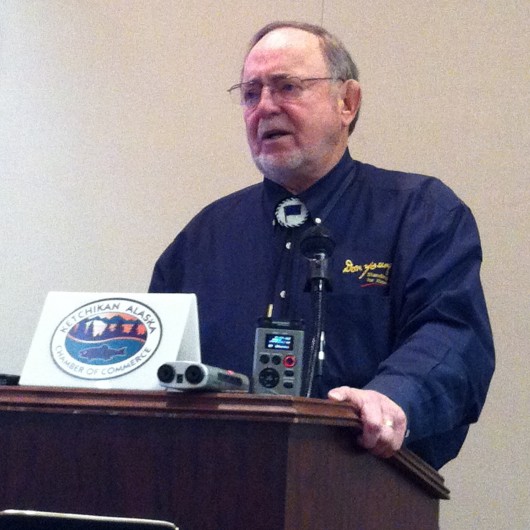 Just in case you were wondering, Alaska’s Rep. Don Young is running for re-election. The outspoken congressman made that point, and many more, during a presentation this week in Ketchikan, where he touched on health care, the economy, resource development, federal regulations and his disdain for cell phones.

Rep. Young is known for his strong opinions, and he expressed many of them during his presentation to a very supportive Ketchikan Chamber of Commerce audience.

Young started by railing against federal regulatory agencies, and the number of new regulations that he says never went through Congress. Young said those regulations are difficult to overturn, and create hurdles for every Alaskan. He said it’s time for the State of Alaska to reject federal rules that limit the ability to use the land.

“This state has got to say, we’re not following the rules of the federal government unless you can show where there is no detrimental effect to the constituents in the State of Alaska,” he said.

For example, Young said it makes no sense for the government to require permits to access National Park Service lands. Young noted that he is co-sponsoring a bill that would allow states to take over management of national parks that fall within their boundaries.

He soon jumped to a topic that’s been in the headlines.

“Now we have the thing that’s on the minds of every congressman and every American citizen today, and that’s Obamacare,” he said. “They should have called it Pelosicare. It was written in (Nancy Pelosi’s) office, with no input from anybody on my side, or even from the health industry. And we were told you can keep your own insurance program if you like it, and we’re finding out that’s not true. We are finding out we were actually lied to by the president of the United States.”

Young has voted repeatedly to repeal the controversial Affordable Care Act. He said those who will be most affected by the law will be younger citizens and their children. He called it an economic disaster.

Speaking of the economy, Young said the solution to the country’s financial woes is to start producing again, and he specified what he believes should be produced.

“There’s only one true dollar value in any society, and that is natural resources, whether that be hydropower, oil, timber, minerals, food, they are the basis of every true dollar,” he said.

Young pointed to the Ketchikan shipyard as one example of industry moving in the right direction.    He added that, if he had his way, every child in the United States would be taught a trade before they leave high school, even if they plan to attend college to continue their education.

An audience member asked whether the Republican Party, to which Young belongs, is truly fractured. He responded that people shouldn’t believe everything they hear in the media, and said the Democratic Party is fractured, as well.

Young partly blamed the 24-hour news cycle for the gridlock in Congress. He said that level of scrutiny, particularly from partisan commentators, discourages elected officials from compromising.

“Under the present system we have now, if that liberal over here starts saying, ‘Well I’ll relax a little bit so you can develop the resource,’ he gets grabbed back,” Young said. “If I say, ‘I can go for a small tax so I can develop resources,’ I get grabbed back. That’s no way to solve a problem.”

Young said people on both sides who refuse to compromise are the problem in Congress and throughout society.

At one point in his presentation, someone’s cell phone rang. The interruption provoked an unequivocal response.

“Who has the cell phone on guys? In my office, that would cost you $20,” he said. “Boy oh boy, I do not like these things. We had that woman in Kodiak doing that thing (texting) and she fell off a cliff and killed herself. This thing is probably the worst thing that ever happened to mankind because no one wants to communicate with anybody anymore. I’ve told you before that I’m the smartest congressman in Congress. Why? Because I’ve never turned a computer on and never shut one off. I’ve never Twittered, Googled or wiggled or diggled.”

The 80-year-old Young is in the middle of his 21st term as Alaska’s only representative in the House. He was re-elected in 2012, and his seat will be up for grabs again next fall.

According to the Alaska Division of Elections, at this point, Young will face John Cox of Anchor Point on the Republican primary ballot. Other declared candidates are Libertarian Jim McDermott, and Democrats Matt Moore and Frank Vondersaar.

Young is visiting other Southeast cities this week. Thursday, he’s in Wrangell, and he’s due to visit Petersburg on Friday.