Gregg Poppen is the campaign coordinator for Ketchikan’s Performing Arts Center fundraising effort. He and First City Players Artistic Director Elizabeth Nelson gave an update during Wednesday’s Chamber of Commerce lunch on how the project is progressing.

They started, though, by stressing the importance of the performing arts in Ketchikan.

“We have pictorial history of community theater going on in this town from the 1920s,” Nelson said. “So visual arts, dance, theater, music have all been an important part of this community and keep us going through the rainy winters.”

First City Players and Ketchikan Theatre Ballet have been putting on performances for many years without a performing arts center, at Ketchikan High School auditorium, for example. Kayhi still will be needed for large productions, such as the annual fall musical or Gigglefeet, but Nelson said a smaller theater would benefit both organizations, and other groups.

“When we do a smaller show, especially a nonmusical, it costs us a lot of money in royalties to produce the show, and an 822-seat theater, we’re never going to fill it,” she said. “In a 250-seat theater, it becomes very affordable, and we will fill that space.”

Nelson noted that royalties are based on the size of the venue, rather than how many tickets are sold. 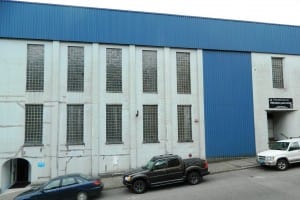 The Fireside Building before its recent paint job.

from the Ketchikan Gateway Borough, City of Ketchikan and State of Alaska. Since then, the Performing Arts Center organization has raised about $250,000 of the estimated $1 million it needs in local donations.

Contributions have come from a variety of sources, including students at Tongass School of Arts and Sciences, a young actor named Emo Torres, who has raised nearly $1,000 performing magic shows, and two concerts featuring the original music of Austin Hays.

Nelson told the story of another young contributor, a 6-year-old child who came in with his mother and took a tour of the building.

“He wanted to know how we were going to make the building happen,” Nelson said. “I talked about how we have to all get together and work really hard and make it happen. Two weeks later, he came back with a little plastic container full of change, and he said, ‘I went into all of our furniture, and this is all the money that I found. That’s for the PAC, and I’ll be back in a couple of months.’”

The Performing Arts Center is separate from the organizations that will use it. First City Players pays rent for its ground-floor office space, and Ketchikan Theatre Ballet will pay rent for the entire second floor, which will include four rehearsal studios as well as offices.

During Wednesday’s lunch, Nelson and Poppen announced that naming rights have been claimed for three of those four studios. Wells Fargo, First Bank and former Ketchikan resident Norm Ream each donated $25,000 to get their names on the studio doors. The fourth studio is still up for grabs.

On the third floor will be the performance space, which is envisioned as a versatile theater that can be configured for different performance needs.

More information about the planned center is available at the Ketchikan Performing Arts Center Facebook page and website, http://www.ketchikanpac.org/