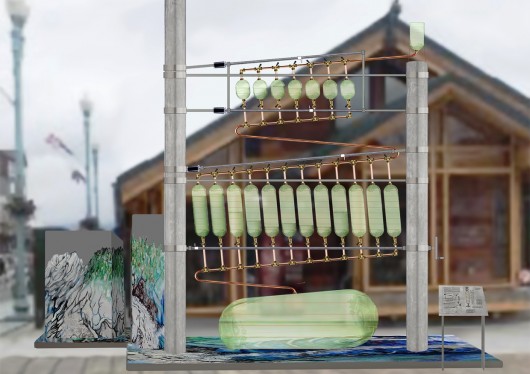 This is a rendering of the proposed rain gauge. Image courtesy Ketchikan Area Arts and Humanities Council.

One of the wettest cities in Alaska is getting an expensive new rain gauge. Ketchikan is moving forward with an innovative, artistic and somewhat controversial proposal from two Dutch designers who specialize in kinetic art projects.

Ketchikan has a love-hate relationship with rain. We love the forest, the streams, the lakes and the fish that rely on our abundant precipitation; but we hate the mold, incessant gray days and our dependence on Gore-tex.

The city averages about 150 inches of rain annually, and has approached 200 in recent memory. It seems only fitting that we have a public rain gauge to measure — and show off — how much precipitation we get each year.

With that in mind, the city put out a request for proposals with a $100,000 cost limit, and handed the selection responsibilities over to Ketchikan Public Art Works, or KPAW, a group affiliated with the local arts council that focuses on public art. That committee recruited a cross-section of residents to review proposals and make a recommendation.

Glen Thompson, one of the panel members, spoke during a recent Ketchikan City Council meeting about the selection process.

“There was about 15-20 of us in a room looking at 31 different pieces of art,” he said. “It took us the better part of the day. We went through quite an arduous process in filtering down, and we think we came up with a pretty good selection for you this evening. The piece has elements of Ketchikan’s mechanical history, it’s visual, it’s interactive, it’s historical. I think it’s really unique.”

The piece features three rows of Plexiglas bottles. The top has seven bottles, one for each day of the week.

“So people will be able to see, each day of the week, how much rain we get,” explained Kathleen Light of the arts council. “From the end of the week, the bottles will then drain into the month. So if it’s October, there’ll be lots of rain. If it’s June, maybe not so much. At the end of the year, all the months will drain into the bottle on the bottom, and that’ll be the cumulative total of the rain of that year.”

Thin copper wires wrap around the outside of each bottle, marking the inches, and those wires are heated so the water inside doesn’t freeze during cold snaps. 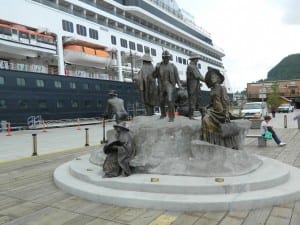 Dave Rubin designed the bronze monument that sits on the downtown dock.

During that Council meeting, about a half-dozen people spoke in support of the selected piece. Local artist Dave Rubin served on the selection panel, and he has some experience from the other side, too. He was the primary artist behind “The Rock,” a popular multi-figured bronze sculpture that sits on the dock, and went through a similar selection process.

Rubin said the rain gauge will spark conversation, and it has already.

“The first time I saw it, I was ‘What is that?’” he said. “And I think that’s how Ketchikan is. Another thing about the character of Ketchikan is: We are different. People are going to look at this and go, ‘I’ve never seen anything like that before.’ Hopefully they say that about Ketchikan. It’s a unique little place. Not like nowhere else.”

The City Council was divided in its support for the rain gauge, and the recommendation squeaked past after a 3-3 vote. Mayor Lew Williams III broke the tie, voting in favor of the project.

A big complaint among those who voted no was the approximately $95,000 price tag. But the $100,000 limit was set by the Council, and Williams noted that funding will come from the city’s share of the state cruise passenger head tax. The justification is that the gauge is an attraction for visitors, and will sit prominently on the downtown cruise ship dock next to the visitor center.

There has been a nonfunctioning rain gauge on the dock for many years, greeting tourists 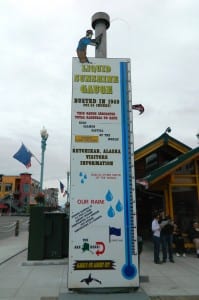 and providing limited information about Ketchikan’s weather. The simple sign claims that it was “busted” in 1949, when Ketchikan hit 202.44 inches.

Speaking of busted, some on the Council said they worry about maintenance, and potential vandalism with the new gauge.

Council Member Bob Sivertsen said, “I have concerns about motors and heaters and sanitation issues. I don’t want to build maintenance into this piece of art just for the name of art.”

Andy Donato, systems engineer with Ketchikan Public Utilities Electric Division, said that KPU can maintain it, although he has some suggestions for the artists to improve its durability.

Light from the arts council noted that the artists are willing to consider suggestions.

But Sivertsen had another, more subjective complaint: “I don’t profess to say a lot about art, but I know what I like and what I don’t like, and I really quite frankly don’t like this.”

While she didn’t speak to the Council on the topic, local resident Candy Peterson agrees with Sivertsen. She launched a mini-campaign on Facebook in opposition to the recommended design. And a big part of her complaint is the piece is by non-local artists.

“I don’t oppose the price of it,” she said in a separate interview. “It’s art and that’s a hard thing to judge, but I do oppose it being outsourced to Holland.”

Peterson opposed the piece before seeing the design, and then after getting a look at it, she still didn’t like it. She said it doesn’t reflect the town, and she doesn’t believe tourists will appreciate the new gauge.

Peterson also echoed concerns about durability, and whether the bottles will end up growing algae.

Light told the Council that a local biologist who specializes in algae is working on a way to restrict growth in the bottles. And the small amount of algae killer that could be added shouldn’t skew the community’s rainfall totals.

City managers still need to negotiate a formal contract with the artists, Jennifer Townley and Bette Adriaanse. That contract will come back to the Council for another vote.

In addition, Nathan Jackson was just hired by the city to carve a replacement for his Thundering Wings totem on Front Street downtown at a cost of $50,000. 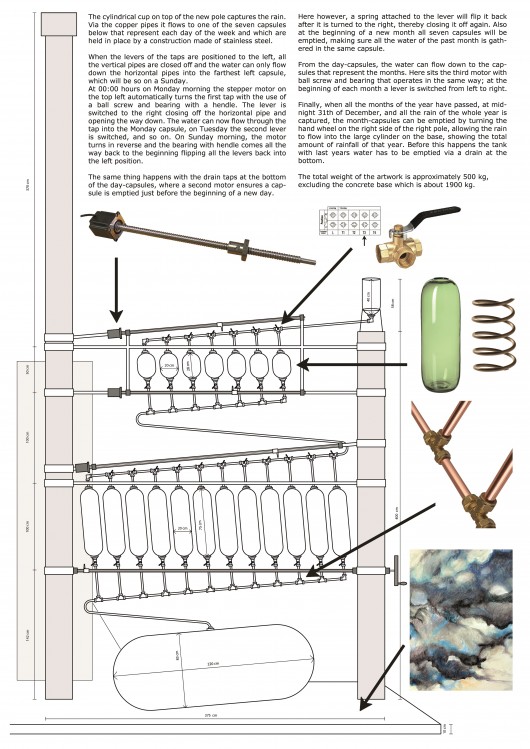