Shelters, benches and walkways eyed for Berths 1 and 2 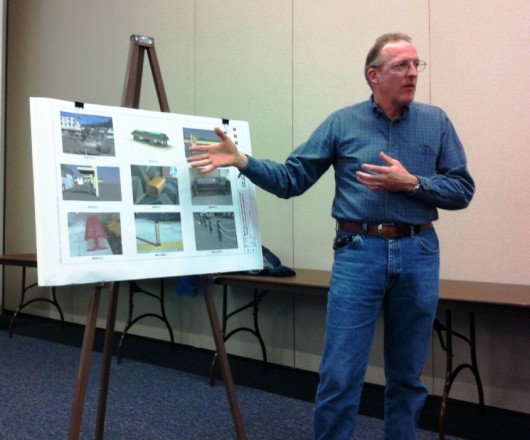 City Port and Harbors Director Steve Corporon talks during a recent public meeting about plans for uplands improvements to Berths 1 and 2 downtown.

Construction on the third phase of the multi-year Berths 1 and 2 renovation project has begun. In the meantime, the City of Ketchikan is kicking off planning and design efforts for the fourth and final phase.

So far, most of the work has involved structural improvements to the two cruise ship berths, such as new pilings and a new concrete deck to replace the deteriorating wood deck. During a public meeting last week, the city’s Port and Harbors Department solicited public input on the uplands amenities, including shelters and benches.

Port and Harbors Director Steve Corporon said the wooden overlay that was installed last year under the bronze monument on the north side of the visitor center was well-received, and he would like to put a similar overlay on the south side, where there is an area for picnic tables. He said that could be done during this year’s construction cycle.

“It looks like the best time, if you want to put an overlay in, is actually to do it in phase three this year,” he said. “If people agree that this is a really good idea tonight, we’ve already asked the contractor for a price to do it in phase three, and we’ll have that price and we have that planned to t\have that ready to go to the Dec. 3 Council meeting. We like the idea of wood as much as we can in pedestrian areas.”

Those in the audience agreed to the new overlay.

Corporon said some other new planned improvements include a gray-water discharge line for cruise ships, which is partly in response to this summer’s extended stay for the disabled Millennium. For the four or five days that vessel was stuck in Ketchikan, the city had to use pumper trucks to take care of the massive ship’s wastewater.

Corporon also talked about shelters, and says an 80-by-20-foot covered shelter is planned at Berth One. Additional smaller bus shelters, though, were rejected by those in the audience, in part because the design left them open to sideways rain.

“If people don’t like these, the easiest way is to just delete them out of this contract,” he said. “Then if we want to look at something in future years, we can do that.”

So, those shelters were nixed and the money saved will go toward other improvements.

The group also agreed that they prefer the old wooden bollards to new steel ones that the port has installed near the visitors center. Corporon said they’ll remove the steel ones and replace them with the more old-fashioned wooden version.

After a brief discussion of benches, Corporon happily handed selection responsibilities over to Historic Ketchikan, which works with the city on various projects. Officials with that nonprofit say they will compile options for the next planning meeting.

That meeting will be Jan. 9, and updated presentation material will reflect the public input gathered.