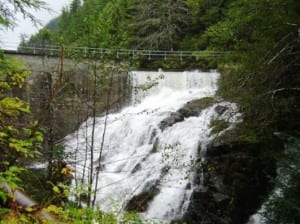 The Whitman Lake dam could be sold. The city is talking to SEAPA about a transfer.

It’s far from a done deal.

But Ketchikan’s City Council has OK’d a plan to negotiate the sale of the Whitman Lake hydropower project.

City manager Karl Amylon proposed selling and/or leasing the project, which is under construction, to the Southeast Alaska Power Agency.

“The good thing is we’re getting more power. I don’t know who’s going to own it. But the community has more power. That’s the main issue,” he says. “I don’t want anybody to ever get the thought that this might be a bad idea. It wasn’t. It’s a great idea. Now we need to find the best way to operate it.”

The Southeast Alaska Power Agency requires member communities Ketchikan, Petersburg and Wrangell to purchase all the available power its two dams can provide. Using electricity from a city-owned Whitman could cost hundreds of thousands of dollars in penalties.

The city’s terms would have the power agency pay off municipal loans funding Whitman construction. With the council’s approval, negotiations can start.

Williams says officials will advertise the opening for a week.

“Anybody interested in being a part of the city council can put in a resume or fill out the application. Then we’ll proceed from there,” he says.

The council will interview the applicants and chose the replacement.

The seat came open with the resignation of Sam Bergeron. He travels a lot for work and attended meetings via phone. A council rules change ended that option.