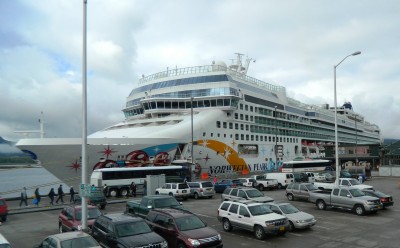 The Ketchikan Gateway Borough Assembly Monday night unanimously approved commercial passenger vessel tax funding of $62,198 toward covered walkways at Berth III.  The original proposal was for half that amount, with the assembly expecting the city to cover the other half.

“They’ve had some issues in the past with just some minor things with the footings there, but when they got down and looked at it, you could see where the whole back rock is starting to slide away from the retaining wall.  That’s probably where the CPV funding is going for the next year or two.  That’s probably at least a seven-figure project.”

Assembly member Bill Rotecki commented that covered walkways would be an appropriate use of CPV funds.  He added likely no funding would be coming from the city.  Assembly member Mike Painter said he was unsure.

“I realize it’s an appropriate use of CPV funds, and it’s clouded by the amount of people and entities that were involved in this.  For me it is.  Historic Ketchikan…the downtown…everybody’s got a plan.  But the borough has got to fund it.  All of the sudden we hit another bump in the road and now it’s going to cost another $62,000 and I’m struggling with it.”

“It’ll be an improvement for downtown that’s not costing the taxpayers any money and it will enhance the experience of  visitors coming here and more people may be getting off the ship.”

Ultimately the Assembly voted in favor of an amended motion providing more than $62,000 for covered walkways.

Also Monday night, the assembly heard from members of the Ketchikan Dog Park.  The group is interested in building a park in the large, plateau area near the Ward Lake Recreation Area turn off on Revilla Road.  Assembly Member Glen Thompson says he supports a dog park, but wants the group to take measures to ensure the area would be kept clean.  He suggested fees.

“Something you might consider is a membership.  Members could have a key card or something and pay dues. So if you have to hire somebody to go up there and clean up you have some funds to do that.”

Group members say they want the park to be accessible to all, but do have members paying fees and hope to find corporate sponsors.  They say they also plan to have a double-gated entry for safety.   Assembly member Bill Rotecki says he too supports the park, but is concerned with the request of a 50-year lease.

“Right now the Borough is looking at trying dispose of that property, and a future buyer might even want that site.  That’s going to be a little bit of a wrinkle that will have to be ironed out, and hopefully it can be, with your plans allowing to go forward.”

One of the members of the Ketchikan Dog Park group, Deborah Hayden, says they already plan to purchase fencing and equipment that is portable in the event the park has to be relocated.

After brief discussion, the Assembly gave four hands direction to staff to prepare a lease proposal for the dog park.

The Assembly also heard from Animal Protection Director Eddie Blackwood.  In a previous meeting, several assembly members questioned the purchase of bullet-proof vests; batons (also called bite sticks) and pepper spray for animal protection staff.  The assembly asked Blackwood to explain the need for the items and expressed concerns about how the equipment would be viewed by the public and pet owners.

Blackwood explained why the items were needed, and demonstrated how they are used.  Several assembly members asked about the level of training staff would receive prior to using the items.  Blackwood says two are currently trained, including himself, and another is scheduled to receive training in December.

Assembly member Alan Bailey, who previously worked in the criminal justice system, says he understands the desire to protect staff, but is concerned about the use of law enforcement equipment by animal control personnel.

“I know what those are used for and I know, in my experience, that Alaska Certification was required.  I don’t know how that plays into animal control.  I appreciate your trying to protect your staff, I applaud you for that, I just have a big question mark right now.”

Discussion continued with several assembly members expressing concerns about training.   Mayor Dave Kiffer suggested in the future, that purchases like this be brought before the Assembly in advance so the need for items can be better understood.

Also Monday night, the Assembly unanimously approved a resolution opposing Senate Bill 90.  That bill would require school district employees state-wide to opt into group insurance coverage.  Analysis by the Borough Finance Director shows it would cost the borough $300,000 more per year if insured under the state plan.

The next regular meeting of the Ketchikan Gateway Borough Assembly is December 2nd.