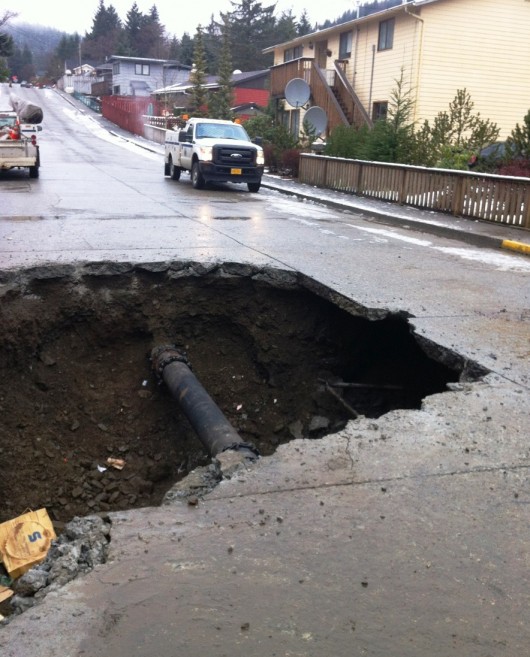 The fixed section of water pipe is seen on Baranof Avenue on Monday. The fill dirt under the street was washed away and the street needs to be repaired before vehicles can safely drive on it again.

Some Ketchikan residents were without water service until Monday afternoon following a water main break at the intersection of Baranof Avenue and Hill Road.

A segment of Baranof between Tower and Buren was closed while crews worked to fix the line.

Cast iron has been used for water pipes for hundreds of years, and it’s pretty durable. According to Ketchikan Public Utilities Water Division Manager John Kleinegger, if it’s properly installed and supported, it has an indefinite life span.

“There’s some cast iron in service in France that’s over 300 years old, (but) if it’s not properly supported, and through the years if the supporting material around the pipe settles in one place but doesn’t in another, that puts extra strain on the pipe,” he said. “When it gets to a certain point, it just snaps.” 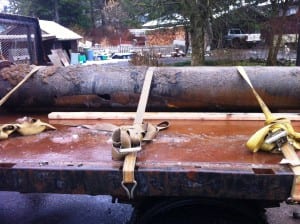 This broken section of cast iron water pipe was removed Monday and replaced with a section of ductile iron.

That’s what happened on Baranof. The ground supporting that cast iron water main settled unevenly over the past 50 years, pressure built up, and it broke.

If all this sounds a little familiar, it’s because this issue has been in the news before.

“We probably have this discussion at least once or twice a year,” Kleinegger  said.

And it will be in the news again in the future.

“Unfortunately, we probably have close to six miles of cast iron pipe still in service,” he said. “Ultimately, there will be future failures until we get rid of all of it.”

So far, Baranof isn’t at the top of the list for replacement, but Kleinegger said it might jump ahead of other projects if more failures take place.

While the broken section of pipe on Baranof has been replaced, and water is flowing to homes, there’s still a big hole in the street.

As crews finished up work on the pipe replacement, KPU Water Division Foreman David Johnston pointed out one end of the hole, which tunnels under the street. Daylight is visible from the other end.

“This whole thing was undermined,” he said, and the city had to block traffic.

Simply stated, water gushing from the broken pipe washed away all of the fill from under the street, leaving a potentially dangerous gap beneath the seemingly sturdy pavement.

It might take a couple of days before the street is again safe for vehicles.

And that replacement section of pipe is made of ductile iron, which Kleinegger said will not break.