SE roads, terminals in budget, but no hydro 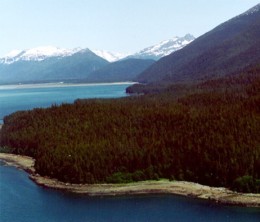 Gov. Sean Parnell’s proposed capital budget has no money for Southeast Alaska hydroprojects. But it has funding for ferry terminals and a road north out of Juneau.

The spending plan for the next budget year includes $10 million toward the massive Susitna-Watana dam north of Anchorage. But it includes nothing for Sitka’s Blue Lake, Ketchikan’s Swan Lake, or any other Panhandle hydroproject.

Parnell says his budget isn’t the end of the line.

“We have contributed … hundreds of millions of dollars to hydroprojects in recent years and we remain open – I remain open – to that discussion in the session,” he says.

He says he’s already met with Sitka Senator Bert Stedman about what might be added. Stedman could not be reached for immediate comment.

Parnell released his capital budget during a speech and press conference in Anchorage. It totals about $1.7 billion, much of it federal funds. (Read more about the capital and operating budgets.)

The view of Berners Bay from Cascade Point. The Juneau Access Project’s Lynn Canal Highway would be built through this area. (Courtesy AKDOT)

The biggest Southeast appropriation is for Juneau Access, a highway and ferry project connecting the capital city to the mainland road system.

“This funding will provide match and federal authorization to continue the progress on the road going … potentially up to the mine,” she says.

That’s the Kensington Gold Mine, north of Juneau and south of Haines.

There’s $20 million to modify the Haines terminal so it can handle the new Alaska Class Ferries. Smaller amounts go toward terminal improvements in Angoon and Kake.

The budget also includes half a million dollars for the Inter-Island Ferry Authority, which links Prince of Wales Island and Ketchikan.

The independent line counts on government grants to balance its budget. Rehfeld says the administration made a conscious move to not put the money in the state operating budget.

The administration tried funding the same grant last year, but legislators removed it.

The budget has no new funding for the Alaska Class Ferries. Officials say they already have enough money for construction.

There’s also no money to build a new mainline vessel to serve Homer, Kodiak and points west. But Rehfeld says the first step is already taken care of.

“It’s in this year’s budget. There was $10 million that was included for FY14. So they’re utilizing funding for design of a Tustumena replacement vessel,” she says.

Parnell’s capital budget also has $15 million toward completion of the
State Library, Archives and Museum project, which is under construction in Juneau.

Other large projects include road and highway work for Ketchikan, Prince of Wales Island and Juneau. The only Southeast school funding is for maintenance of the state-run Mount Edgecumbe High School in Sitka.

The governor’s capital budget now goes to the Legislature, where projects are usually added. But with oil revenues down, he says it’s going to be a lean year.