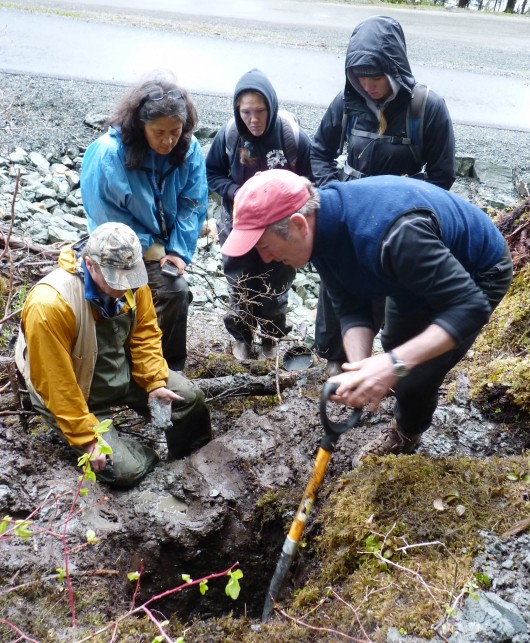 Scientists are finding more evidence that Southeast Alaska’s first residents arrived more than 10,000 years ago. It’s coming through a new method of locating early settlements. But it’s not easy to search for ancient shorelines in a region where sea level is not a constant thing.

Dave D’Amore digs into a hole on the University of Alaska Southeast’s Juneau campus.

He’s looking for evidence that this spot – around 100 feet above sea level – was once an ocean shore.

“I can kind of see it now. This looks like it’s organic, over that beach,” he says. 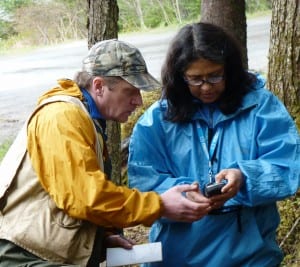 D’Amore is a soils expert with the U.S. Forest Service’s Pacific Northwest Research Station. He’s one of the scientists working with university students to map Juneau‘s ancient shorelines.

They’re hard to find, because of the region’s ever-changing geography.

The weight of huge glaciers depressed the Earth’s crust. Their forward movement created raised bulges of land. Their melting allowed the surface to rise. And then, there’s plate tectonics.

Early residents – Tlingit Indians or their predecessors – lived along these shores. So finding their camps and villages, sometimes hundreds of feet above today’s sea level, can lead to new discoveries.

Dan Monteith is an anthropology professor at the university. He’s scooping water out of another hole, where he hopes to find something interesting.

“We need one of those three-gallon buckets,” he calls to a nearby student.

They’ve already found some. Monteith walks up a small creek to an eroded bank. There, sticking out of the soil, are small, dirty-white seashells. 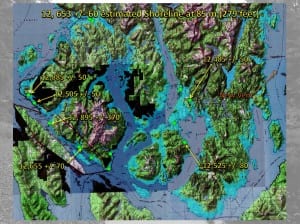 This enhanced map shows the Ketchikan-area shoreline about 12,600 years ago, when sea level was 280 feet higher. (Jim Baichtal/U.S. Forest Service)

“By collecting shells and other things from those areas, then we can radio carbon-date those and get kind of a fixed point of when that was a beach at different points of time,” he says.

The technique was developed on Prince of Wales Island.

Forest Service Geologist Jim Baichtal says it can be used to make an educated guess of where early residents used to live.

“Just as you and I today would camp within 2-3 feet above high tide, so would folks in the past. And if you had food and you had good moorage, that’s the kind of places we would camp,” he says.

Baichtal, archaeologist Risa Carlson and other scientists began their effort about four years ago. On an early outing, they headed up an estuary and into the forest to where waves lapped the shore thousands of years before.

“And we dug down about 50 centimeters (20 inches) and dug into the top of over a meter of charcoal and tools and other things that were left there by the inhabitants of that place,” he says.

Radiocarbon-dating showed those items to be around 10,000 calendar years old. 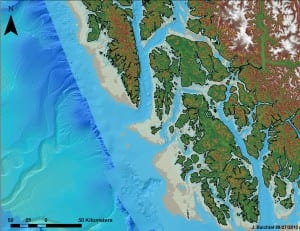 This enhanced map shows a larger Southeast Alaska when shorelines were about 500 feet below today’s. (Jim Baichtal/U.S. Forest Service)

Baichtal says he and other scientists used the technique to find archeological material on more than 70 Prince of Wales Island sites.

About 10 have been dated to around that same time, showing Southeast’s first residents were well-established by then.

“It had been thought in the past that maybe there weren’t large populations here that early. But it was because we never knew where to look. And this is giving us a whole different way of where to look and what to look for,” he said.

Back at the university, Monteith makes sure his students record GPS coordinates for each hole they’ve dug.

“Did you guys get latitude and longitude on any other test bits we got?” he asks.

The group has dug in other areas of Juneau. It’s also inventoried known tribal sites in a bay north of town. 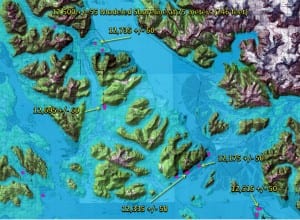 Student Bernadine DeAsis says that helped her learn some of her own history.

“That was really important for me to get a perspective of where the Tlingits were in this area, because I’m Tlingit myself,” DeAsis says. “We know for sure that they’ve been in this area, so it’s kind of like a treasure hunt for me.”

The effort will continue for many years, expanding to other parts of the region.