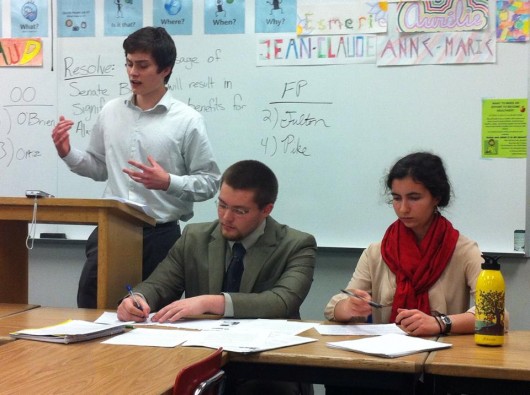 Sam Ortiz of Ketchikan argues against Senate Bill 21 while Sitka High School debaters Owen Fulton and Chaya Pike take notes and prepare for their turn at the lectern.

The debate over Senate Bill 21 continues throughout the state, with a citizen’s initiative coming up next year on the controversial measure that changes the state’s oil taxes. Those who support SB21 say it will encourage production; opponents say it gives away state income with no guarantee of a return.

And they say kids don’t care about current events.

“Our state contains the largest oil field in North America, Prudhoe Bay, and as stated in our Alaska Constitution, we as citizens collectively own these natural resources and have the right to receive the maximum benefit, but as Senate Bill 21 comes into play, this key fundamental principle is abandoned.” 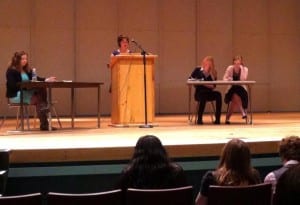 From left, AnneMarie Pike listens while her partner, Celia Lubin of Sitka High School, argues in favor of Senate Bill 21 during the final debate Saturday night. Waiting their turn to argue against SB21 are Ella Sherrill and Cheyenne Mathews of Ketchikan.

That’s Ketchikan’s Ella Sherrill, arguing – as you may have guessed – against Senate Bill 21. She and her partner, Cheyenne Mathews, made it to the final exhibition round, where they competed against Sitka debaters AnnMarie Pike and Celia Lubin.

“The Alaskan oil industry is an industry worth saving. It accounts for 50 percent of the jobs indirect or direct relation to the oil and gas industry, so it’s a very important industry: The economic backbone of our state.”

That’s Lubin, giving a pro argument. And here are Mathews and Pike, with a little more back and forth.

“My opponents have stated that … SB21 provides incentives for oil companies, but with the announcement of this bill, we have seen oil companies leaving,” Mathews said. “Specifically, Pioneer Natural Resources. It took them a $350 million loss to leave, so what does it say about this bill, if it can’t keep companies and it’s supposed to incentivize exploration, but they took this much of a risk and a loss to leave even after this bill was announced.”

“What I think this debate comes down to is whether we are far-sighted enough as a state as a government and as a people to act in our best long-term interest, instead of losing our nerve, and opting instead to keep production taxes high and to starve the oil industry out of Alaska,” said Pike. “No one benefits in that situation.”

Those four eloquent young women are just a few of the 44 Southeast high school students who gathered in Ketchikan to show what they’ve learned over the last few months about Alaska’s oil taxes.

Debate teams spend a lot of time researching an issue in preparation for a debate meet. And they can’t pick sides. They have to be ready to argue either way, because they don’t know ahead of time which side they’ll get.

Early on in the meet, Ketchikan’s Kiera O’Brien hid her nerves well for her debut debate: 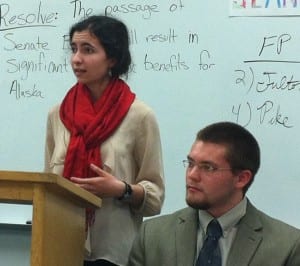 Chaya Pike and Owen Fulton of Sitka High School, in the opening round of debates Friday night.

If some of these arguments sound familiar, consider the sources. Debate teams do a lot of Internet research, but they also talked to Alaska lawmakers, who themselves have been publicly vocal on the issue. Here’s Kayhi debate coach Dan Ortiz: “We obviously went to Sen. (Bert) Stedman and Sen. (Bill) Wielechowski, because they opposed this bill, so they gave us the stronger con arguments; and the governor and his office, the budget office, gave us the stronger affirmative arguments, which was very helpful. It’s a good experience for the kids to actually realize that they’re talking to the governor’s office, that there’s people who deal with this stuff and it’s very real to them. And hopefully it’s become very real to these guys.”

Pike and Fulton had some legislative assistance, as well. Pike said that Sitka Rep. Jonathan Kreiss-Tompkins practically lived in their debate classroom as they prepared. While Kreiss-Tomkins strongly opposes SB21, Pike said he got the Sitka team in touch with a lobbyist from the other side to help with the pro arguments.

“It’s so much fun!” she said, laughing with joy. “I don’t really know what’s so exciting about it. It’s really fun to learn about new things and challenge our preconceptions, and then to get up and challenge other people who have the same preconceptions that we do, and have to kind of work through that.” 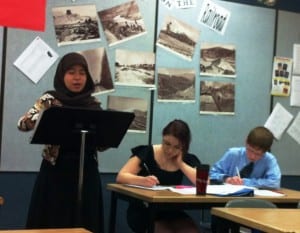 Salma Zakiya, an exchange student from Indonesia, argues against SB21 during an early round of debates Saturday. Listening are Kalysta Barrett and Luke Dossett of Ketchikan.

While O’Brien and Ortiz didn’t like the topic as much as previous ones, they said that SB21 definitely is more relevant to them. It did mean a lot of detailed research.

“There’s a lot of facts, figures, statistics, policies,” O’Brien said. “There’s a lot of stuff I didn’t know about it. But it’s definitely more… it’s closer to home than Iran and nuclear proliferation, for sure.”

When asked whether they developed an opinion on the topic, O’Brien said, “I can see both sides. That’s part of debate; you learn both sides, you get to see it both ways. It kind of makes it hard to have an opinion, either way.”

“They pick debate topics because they’re debatable,” Ortiz added. “Generally, I develop one by the end, but I try not to think about which side I’m on until the end.”

Chaya Pike and Owen Fulton, along with AnnMarie Pike and Celia Lubin, were the two top-scoring teams. They didn’t compete against each other in the final round because they are from the same school, which is why the third-place Ketchikan team ended up in what all the coaches agreed to call the final exhibition debate.

That final debate was judged, though, and the judges unanimously chose Ketchikan’s Ella Sherrill and Cheyenne Mathews as the winners.