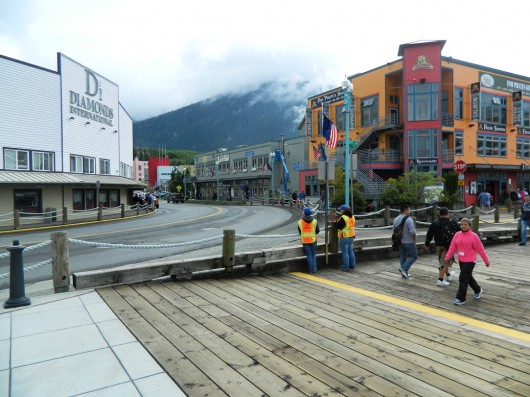 This last section of wooden dock, seen here during the 2013 summer tourist season, soon will be replaced with new concrete decking, part of the ongoing downtown dock renovation.

City of Ketchikan Mayor Lew Williams III gave his annual State of the City address last week during the Greater Ketchikan Chamber of Commerce lunch. He touched on a variety of concerns and projects, from pipe replacements to public art.

“The state of the city is good. It’s a little interesting at the moment, but it is good,” Williams said as he presented his traditional end-of-the-year report on the City of Ketchikan. One of the first items he stressed was ongoing efforts to discourage illegal drug trafficking in Alaska’s First City.

Williams also talked about the multi-year dock project that the city is working on, which has entered its third phase. Contractors are tearing up the remaining wooden deck on Berths 1 and 2, replacing the rotten pilings, and eventually will resurface the area with concrete decking. In the meantime, design work has begun for the fourth and final phase.

“So, shelters, benches, amenities down there. After all the work is done we want to make it 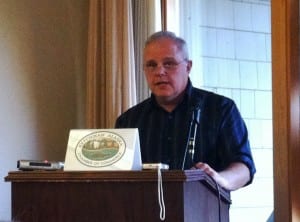 nice and I hate to say it but that also includes public art,” he said. “That’s a joke. Art isn’t a joke, we will have public art, but I hope we all can agree on what we’d want down there.”

Williams’ “joke” about public art is a reference to a recent controversy over a proposed artistic rain gauge that the City Council initially accepted. Later, following some public criticism of the $95,000 rain gauge, the Council chose to remove funding for it from the budget, which disappointed those who supported the project. Williams touched on that issue briefly during his presentation.

“I’d like to tell you that the rain gauge issue is over, but the city received a letter today from the two artists and they’re not happy,” he said. “Now they’re talking about legal action. I don’t think there’s much they can do about it. I imagine they’re just trying to vent some of their frustration because they did put a lot of work into providing that proposal and ideas.”

In addition to port improvements, the city has been making headway with harbor projects. Williams said the second boat launch at Bar Harbor is complete, which should help during the summer months. Another big project there is the new $5 million drive-down ramp, which Williams predicts will be done by spring.

The biggest project Williams talked about is the hospital renovation. Voters approved bonds for that project in the recent election, and Williams said that work will help support the community’s economy into the future. He said doctors who work for the PeaceHealth-run hospital like it here and want to stay.

The city is in the process of selecting a construction manager for the hospital project. Williams said he expects construction will start in the spring. He stressed that the renovation will be paid for through the existing hospital sales tax.

Williams then moved on to what he called the “gritty stuff:” sewer, water and storm drain lines, all aging and some failing. Recent heavy rains were too much for some storm drains, and that led to flooding in some parts of the city.

How to fix the storm drain problem is an ongoing question. Williams said it might come down to creating a Local Improvement District, which would tax neighborhood residents in order to make the needed repairs.

Williams also talked about Ketchikan Public Utilities. The 4.6 megawatt Whitman Dam project should be completed this spring, and the city is negotiating with the Southeast Alaska Power Agency to potentially take over the dam from KPU.

KPU Water hopes to be able to start using the chloramination water treatment facility soon, but the city still is waiting for state permits. And the telecommunications division is well on its way to adding cellular phone service to its lineup.

As he wrapped up his talk, Williams stressed the need for the community to remain flexible.

Williams said the city must accept change to continue thriving into the future.