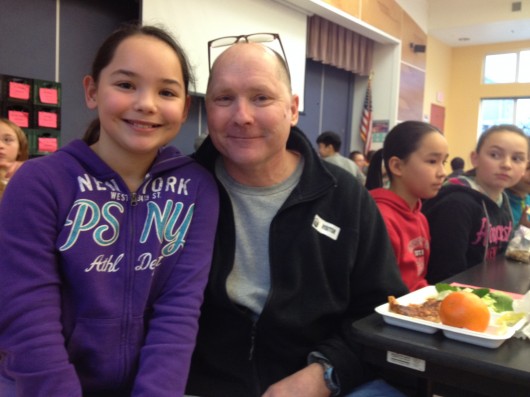 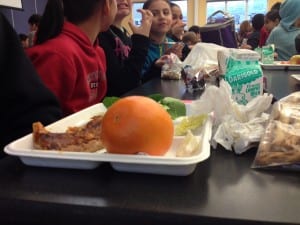 The long tables in the Fawn Mountain elementary school cafeteria were filled with third through sixth graders. But they had some much taller friends sitting with them today: parents.

The Ketchikan School District invited parents to come to their children’s schools this week to taste the lunch menu.

“We thought it would be great to have the school open and let the parents come in and try the lunch and see the environment and try to collect all that feedback,” said School district Wellness Director Barbara McCarthy, one of the organizers of the parent lunch week.

On the menu Tuesday: pepperoni pizza, salad bar and orange.

Just a few parents were at Fawn Mountain Tuesday. Jesse Embree is a paraprofessional at the school. She’s been in this cafeteria many times, but never tried the lunch her sixth grade daughter, Nicole, eats.

“I think I like the lunch I bring from home,” Embree said. “But actually today’s lunch, it’s pretty good.”

One table over, Gary Gaugler sat with his fifth grade daughter, Abigail.

The consensus between the two? Eh…it’s alright.

“They have a rating of one to five,” Gary Gaugler said. “I’d give it a three.”

The parents and teachers noted one thing that might add to the mediocrity of the lunches. They’re cooked somewhere else, and then brought here. If the food were a bit fresher, it could be better, they said.

Derek Meister is a counselor here. He is one of the staff members who tried the kids’ lunch this week. He sampled Monday’s chicken nuggets.

“They were a little soggy,” he said. “The flavor wasn’t bad, but the texture left much to be desired.”

The parents were gentle in their criticism of the school lunch. They were happy to see fruit and vegetables, and grateful to the schools for asking them to come in and give feedback.

The harshest food critics were the kids.

“I think if my parents came, they would probably gag,” one sixth-grader said.

“The school lunches are really gross,” said another. “I had this ham and cheese sandwich that was not edible.”

McCarthy says the schools are trying out some new recipes, like chicken wraps and tuna pita sandwiches.

“Sometimes [the kids] are excited about what they’re eating,” he said. “And sometimes they let me know that they’re not and food ends up in the garbage.”

Each parent who participates this week is given a survey to fill out. They rate, on a scale of one to five, what they think of the nutritional value and taste of the lunch they just ate. In total, about 50 parents signed up to try the school lunches at Ketchikan’s elementary, middle and high schools.