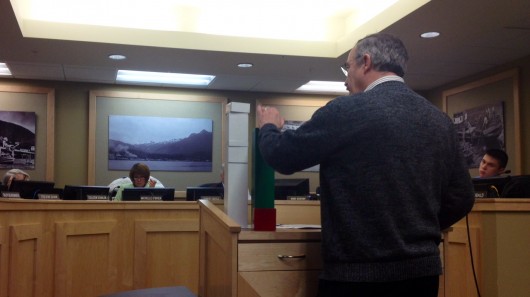 The School Board meeting Wednesday night marked the first time Ketchikan’s borough management publicly talked with the school board about their lawsuit against the state. As board members looked on, the borough manager used blocks and a ten dollar bill to explain why the borough is suing Alaska over education funding.

$10 for $8.40? Bockhorst said that’s the kind of trade the Ketchikan Gateway Borough makes with the State of Alaska year after year, but at a scale 2.6 million times greater.

Because of Ketchikan’s borough status, taxpayers are required to fund a portion of the public education system here.

The Borough argues in its suit that the state is shirking its responsibility to fund basic educational need.

Bockhorst held a red block in his hand that represented the money Ketchikan pays each year for basic educational need.

“Ketchikan taxpayers have been forced to pay one hundred million dollars in the past 22 years to backfill the state’s underfunding of basic need,” he said.

Bockhorst says he hopes other boroughs in Alaska will support Ketchikan in the suit.

So far, State Representative Tammie Wilson, from Fairbanks, is the only legislator who has expressed public support. She filed a bill to repeal the local contribution.

After Bockhorst’s presentation, the school board moved on to a discussion of the school district’s Fiscal Year 2015 budget.

One line in the budget board members said would be much discussed going forward is a proposed reduction in the preschool program staff, from eight teachers to five. There could also be cuts to the music program staff, Superintendent Boyle said, but the budget is very preliminary.

“I’m not saying this is a good budget,” Boyle said. “But it feels better than what we have typically.”

Board member Colleen Scanlon said she is not in favor of the preschool cuts.

“What I’ve been told and heard about the preschool restructure right now, I’m not in support of that and I’m gonna want to talk about that more,” she said.

On the proposed school calendar for next year, a five-day vacation is scheduled for Thanksgiving break, instead of the usual three days.

School district HR director Rick Rafter asked board members if they were interested in looking at a potential four-day school week for the middle and high schools, and members said they would like to learn more about the possibility.

Several requests were quickly approved at the meeting. The computer lab at Ketchikan High School will have new iMacs to replace the six-year-old computers there.

A Student Safety Committee, which was the idea of board member Trevor Shaw, was approved.

The board approved a leave of absence for teacher Dan Ortiz, who is running for political office.

And, the policy to boost favor for local bids was adopted.