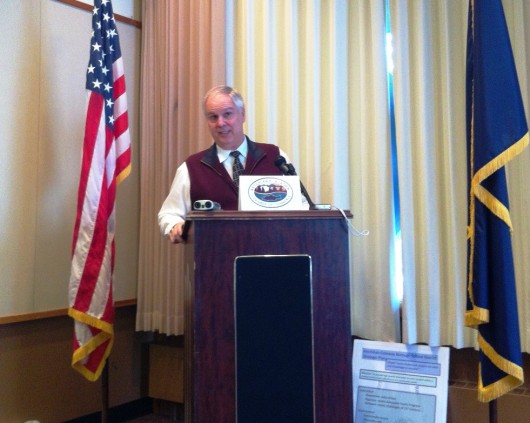 Ketchikan School District Superintendent Robert Boyle gave a “State of the Schools” address at Wednesday’s Chamber of Commerce lunch, and touched on a number of topics. Boyle discussed education strategy, interventions to help struggling students and the numerous cooperative programs the district runs with local groups and businesses. A big topic right now is education funding. Boyle addressed the district’s budget for the coming school year, which the School Board is in the middle of drafting.

The State of Alaska requires that school districts spend at least 70 percent of their budgets on direct instruction, and many districts struggle to reach that standard. In fact, some ask for waivers year after year.

“We’re at 79 percent,” Boyle told the Chamber audience. “If we use a $32 million budget for our school district, we’re up there (at) $2.7-$2.8 million above and beyond what is required for direct instruction.”

Superintendent Boyle said that’s a result of a concentrated effort to keep costs low in every way so that as much money as possible can be spent on students. He said they’ve cut fuel and electricity consumption – and hope to reduce heating costs even more by converting some schools to biomass boilers. Boyle said they also keep busing as efficient as possible, look for grants wherever they can, and maintain a small central office staff.

Boyle said the Ketchikan School District’s central office is about 4 percent of the overall budget.

“Statewide, the next lowest is 7 percent,” he said. “We could increase our district office expenses by $900,000 and still be the smallest percentage of a district office of anyplace in the state of Alaska.”

Boyle said other district offices in the state run from 7 to 14 percent of their budgets.

“Our district office is small. It’s a lean machine and we’re getting some things done,” he said.

Despite saving wherever possible, the Ketchikan School District still faces budget challenges. The district budget lists the programs and costs, some required and others optional, in order of priority. The optional items are underneath the mandatory programs, and in the middle of the list is a red line. Items below the line are not funded – at least not with expected money.

Some of the items below the red line right now include music programs for the elementary schools, a dean for Houghtaling Elementary School, five administrative staff members, school supplies and materials, new computers and extracurricular activities.

Boyle said some of the items under the red line will most likely be funded. There will be some carryover funds from this year, and the state is talking about increasing the per-student allocation.

“We’ll have more money, we’ll be more successful than what the red line is today, but that’s where we are today,” he said. “We’re confident that the music program will be funded.”

Activities funding, though, is pretty far down the list. Whether it will remain in that spot is up to the School Board.

Boyle said activities continue to be a problem, not just for funding reasons, but because of increasing transportation issues, and students missing out on class in order to attend competitions in other communities.

“We’re going to try and address that in a number of different ways,” he said. “One of them may be the suggested creation of a four-day calendar at the high school level, or a calendar that doesn’t fall five days every day, every week, every month. We’ve got to do something different so we can address transportation issues.”

Boyle invited members of the public to attend School Board meetings, in order to offer suggestions and input about the budget and other topics of interest.