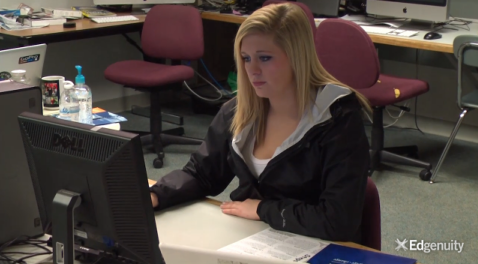 Sami Wright is one of the students in the video Ketchikan submitted for the Edgenuity video contest.

At the Ketchikan Gateway Borough School Board meeting Wednesday night, the board approved new technology for the schools. The members unanimously agreed on a $29,000 3-D printer for the high school. And they approved a three-year online learning contract.

“I really like what I see when I take the courses, they’re different,” said Paige Hosley, the student representative on the School Board. “And I also have friends who thrive way more in the online environment than they do sitting in a classroom with a teacher, feeling like you are one amongst others, where in the online course you feel like you have a more one-on-one relationship with your virtual teacher…I really like seeing students do better with this than struggling in the classroom.” 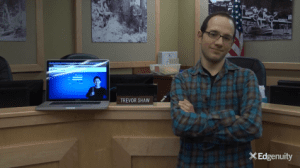 The $95,000 three-year contract with Edgenuity was approved, and the timing is serendipitous.

Just a few days before this meeting, Edgenuity announced that Ketchikan was the winner of their “Every Click Counts” video contest. 18 schools from around the U.S. submitted videos to Edgenuity showing how digital learning helps their students.

“By the age of 16, I was in a lockdown juvenile jail for over a year,” says Sami Wright, one of the students in Ketchikan’s video. “My life was definitely headed down the wrong path, and graduating from high school wasn’t even a consideration. At that point, I made a choice to try one more time, and I was enrolled in my first Edgenuity class. Now, two years later, not only am I on track to graduate, but my GPA is strong enough that I’m eligible for college scholarships.” 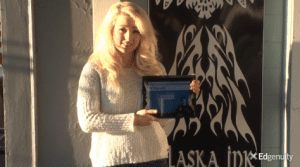 “You know I kept telling the kids, our stories are good enough to win,” said Mark Woodward, a Revilla online teacher who helped put the video together. “And I know that that’s kind of cocky in a way, but I just knew, you know, who else is going to have these stories?”

It was the stories that impressed Edgenuity. Deborah Rayow is their Vice President for Core Curriculum, and one of three people who chose the video contest winners.

“The video from Ketchikan was amazing,” she said “They showed us stories of students who were doing things with their current lives and preparing for their futures in a way that blended learning and online learning was making possible for them and it was really inspirational.”

Megan Dial is another of the students featured in the video. She said that Edgenuity classes helped her graduate a year early, enabling her to pursue a career as a tattoo artist, taking over her parents’ Ketchikan business, Alaska Ink.

Mr. Woodward helped her incorporate the online classes into her school schedule.

“She was like, “Look, everyone’s throwing roadblocks at me, this is what I want to do Mr. Mark, how do I make it happen?”” Woodward recalled. “And we sat down one day, we came up with a plan, and she was like, “Fine, get out of my way, here I go.”

The final person in the video is Trevor Shaw, who took online courses through Ketchikan’s virtual school program, Fast Track. He graduated and became the second youngest publically elected official in Alaska, winning a seat on the School Board.

Wednesday night, when Edgenuity came up at the Board’s meeting, Shaw vouched for the program.

So, what is the school district planning on using the $5,000 award for? Woodward says the students really want a drone, to use for filmmaking in the high school’s media productions class, which Mr. Woodward teaches.

Deborah Rayow at Edgenuity said she’s never heard of using a drone for filming, but the fact that it was the students’ idea makes her happy.