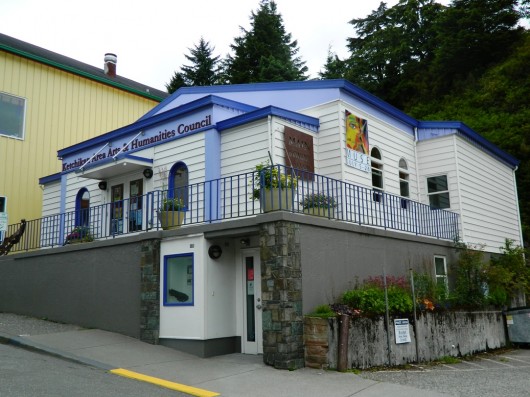 The Ketchikan Area Arts and Humanities Council, seen here on a nice summer day, is one of the local nonprofit organizations that could sign up for Pick.Click.Give. if House Bill 75 is adopted.

A bill that would remove a cumbersome requirement for nonprofit agencies to participate in the statewide Pick.Click.Give. program is making its way through the House. Proponents say the bill would allow smaller organizations to put their names on the list of groups Alaska residents can choose to support with part of their Permanent Fund Dividends.

The Ketchikan Gateway Borough Assembly voted unanimously this week in favor of a resolution supporting House Bill 75, and the Ketchikan City Council will vote on it Thursday. The bill was proposed by Rep. Paul Seaton, and has several cosponsors, including Peggy Wilson, who represents Ketchikan.

Wilson says the cost of an annual audit was significantly more than some of those smaller nonprofit groups would ever receive through the program.

“And so they found that it wasn’t worth it. And some groups found that exclusion from the program, some of their supporters thought that they were no longer certified as nonprofits, which wasn’t true,” she said. “So this accomplishes two things: It keeps them in front of the public and they know what’s going on, and it also helps the smaller nonprofits do more in their local communities.”

Wilson added that as the state budget shrinks, nonprofit groups need all the help they can get, and this bill will provide another potential revenue stream for the smaller organizations.

The bill does not remove all financial accountability. All Pick.Click.Give donation recipients must be federally approved 501(c)(3) tax-exempt organizations, meeting all federal requirements.