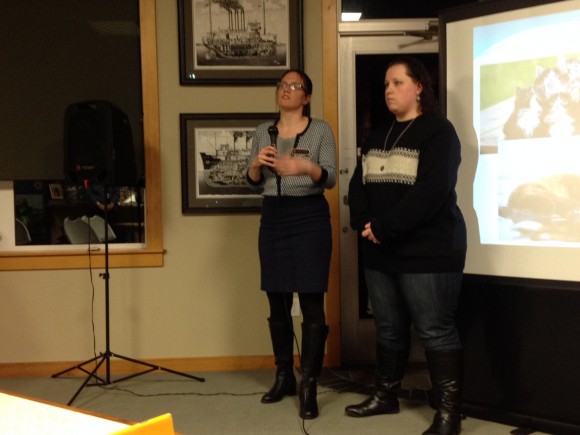 Becca Wachter and Amanda Glanzer presented on vaccines for adults.

Do adults need to get flu shots or other vaccinations? The staff at PeaceHealth Ketchikan Medical Center wanted to answer that question for the community. They held a discussion on “Immunizations Through the Years” on Tuesday evening at The Point Café, as part of the hospital’s monthly Seaside Chats.

And their answer? Yes. Adults do need vaccinations.

They began with this staggering statistic: Adults are 100 times more likely to die of vaccine-preventable diseases than children.

Wachter and Glanzer said most people don’t see certain diseases, so the risk of that disease seems lower than the risk of the side effects from the vaccine. They call this “vaccine hesitancy.”

“I mean think about the last time you saw a polio case,” Glanzer said. “I can promise you it wasn’t in the past couple years, or the last several years. Smallpox has been eradicated because of vaccination so these are very exciting things.”

However, she continued, small outbreaks of these and other diseases, like measles, do happen.

And the huge number of tourists coming into Ketchikan each year puts people here at even more of a risk.

“We are a town that makes our money off of people coming from far away,” Wachter said. “So diseases like diphtheria, which is nearly gone from the US, that is not the case in different parts of the world. When you think about all the people coming in and out, especially in the summer, it’s amazing how small the global community has become.”

Glanzer and Wachter reviewed some of the leading vaccine-preventable disease that concern adults, such as shingles, pneumococcal, HPV, and influenza.

They also went over possible side effects from vaccines, which were minimal. Glanzer wanted to debunk one common misconception about side effects: a flu shot does not cause the flu.

The nurses offered flu, shingles, pneumococcal,  and Tdap vaccines right then and there at The Point, but no one in the crowd took them up on the offer. A few said they rely on their doctors to let them know whether they need any vaccines.

Glanzer ended the talk with an anecdote about what one doctor she worked with in Atlanta would tell parents about vaccines.

“We used to have parents come in and say, “I’ve never gotten the flu, I don’t need the shot, I’m doing fine without it,”” Glanzer said. “And he turns around and he says, “Well have you ever been in a serious car accident?” And most parents go, “Well, no.” And he goes, “Well do you still wear your seat belt?” It’s the same thing, why not protect yourself if you have the option.”

The next Seaside Chat will be about sports injuries and will be held at 5:30 on March 18th at The Point Cafe.