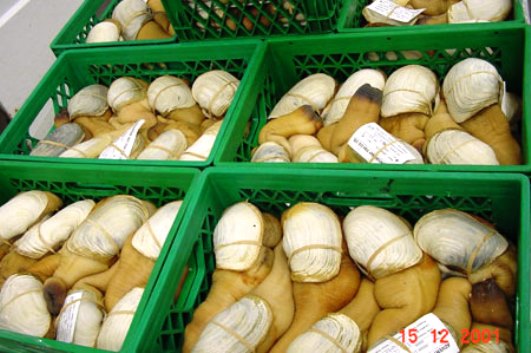 Alaska Sen. Lisa Murkowski and members of the Southeast Alaska Regional Dive Fisheries Association talked last week about the possibility of a political solution to China’s ban on Alaska and Washington State geoducks.

Senator Murkowski stopped in Ketchikan after her trip to Juneau to address the Alaska State Legislature. She met with various groups, including some dive fishermen who are worried about China’s ongoing ban on geoduck clams.

“I liked how one gentleman put it,” she said during a press availability later that day. “He said, ‘Some are saying it’s an issue that relates to science. Some have suggested there’s more politics. It’s probably political science.’”

Phil Doherty is the executive director at SARDFA. He said he told the senator that scientific reasons behind China’s embargo are not clear to his group, or to divers in Washington State.

“We haven’t gotten all the information from China on their testing protocol, or whether any of our clams that were subsampled over there were hot,” he said. “But certainly the PSP testing protocol that we do here in Alaska is very much more than adequate.”

PSP, or paralytic shellfish poisoning, is caused by eating shellfish contaminated with certain kinds of algae that produce toxins. It can be deadly, so all commercially harvested shellfish is tested before it can be sold.

The ban has been in place since mid-December, when Chinese officials claimed they found high toxin and arsenic levels in geoducks from Washington State and from dive areas around Ketchikan. Doherty said the ban is a serious issue for local divers.

“We’ve closed our fisheries down completely,” he said. “We haven’t fished for the better part of six now, going on seven weeks, because of the volatile market in China and the inability of our geoducks to reach the market. This is our No. 1 concern right now.”

Doherty said his group generally tests the geoduck fishing grounds weekly. If an area comes back “hot,” or above safe levels for PSP, divers won’t harvest there, fishing instead in tested safe areas.

However, the association has suspended testing, and hasn’t fished for weeks. Doherty said the economic impact could be significant.

“We’re less than halfway through our guideline harvest level. If this thing drags on much longer, it could be 300,000-400,000 pounds of geoducks that may go unharvested,” he said. “The price before the closure was close to $10 a pound, so you’re looking at an ex-vessel value of between $3-4 million that may not get harvested.”

Doherty noted that Canadian geoducks are not included in the ban, although Canada’s sampling protocols are similar to Alaska’s. He said that adds to the evidence that the move might have been political.

A group of U.S. officials are going to China on March 3 in hopes of resolving the geoduck issue. Murkowski says she’s going to pay attention to the outcome of that visit.