School Board to vote on principal contracts 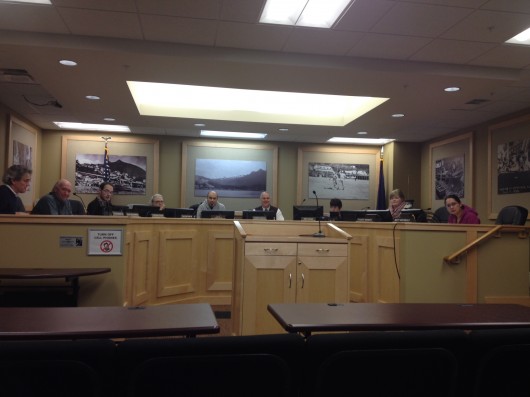 The School Board at a recent meeting.

The Ketchikan Gateway Borough School Board will vote on contracts for two school principals at its meeting on Wednesday evening.

The board will decide whether to approve hiring David Jones as principal of Houghtaling Elementary School. He would be taking over for Nancy Moon, who decided to resign after two years at Houghtaling. Jones started working for the Ketchikan school district in 2000 as an elementary teacher and most recently served as Dean of Students at Houghtaling.

The board also will vote on whether to retain Bob Marshall as principal of Ketchikan Charter School. Marshall is currently in his second year as principal there.

Danny Robb Jr., a welding and Algebra teacher at Ketchikan High School, has turned in a letter of resignation for board approval. Robb says in the letter that he does not feel Kayhi is the proper fit for him any longer.

The Board also will vote on whether to confirm members of the recently formed Student Safety Committee. Board members Trevor Shaw and Ralph Beardsworth will serve on the committee. Other people who have expressed interest include Shona Hosley, Ginny Clay, Valerie Brooks, Debbie Langford, Sheila Klosterman, D. Jay O’Brien, and high school student Sylvan Blakenship.

Southern Southeast Alaska Technical Education Center (SSEATEC) has submitted a proposal asking the Ketchikan school district to help fund its Basic Construction Course. The School Board will discuss how this might fit into the district’s budget.

The board also will vote on a $29,000 contract with Safe Havens Institute for security evaluation and consulting.

Wednesday’s School Board meeting starts at 6 p.m. in the Ketchikan Gateway Borough Assembly chambers at the White Cliff building. Public comment will be heard at the start and end of the meeting.