Chemotherapy patients at PeaceHealth Ketchikan Medical Center have a brand-new infusion suite for their treatments. The center opened last week with a special ceremony, and the first patients tried it out on Tuesday.

Cancer patients in Ketchikan were receiving chemotherapy treatment before the new suite opened, but the location and the space provided wasn’t ideal. Infusion therapy nurse Deb Davis said it was part of the hospital’s Intensive Care Unit, “Which meant anything going on in the Intensive Care Unity, whatever was going on there, you were part of it, whether you liked it or not. It also was down at the far end, hard for some people to find, and to have to walk that far from the elevators.”

In contrast, the new infusion suite is 15 steps from the elevator; it’s a private space dedicated to chemotherapy patients. It has new chairs, plants, a coffee pot, and it’s bigger. Davis said the hospital now can treat four patients at the same time, rather than the previous maximum of three. There’s also a new consulting area. 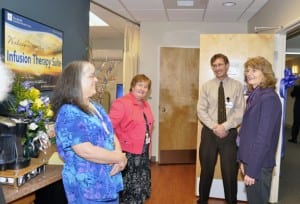 Davis said the $200,000 needed to renovate the space into a chemotherapy infusion suite was raised through individual donations, some state funding and the annual Solestice shoe auction.

The project is not part of the city-owned hospital’s multi-million-dollar grand renovation, which will be paid for mostly through local voter-approved bonds and state funding.

Alaska Sen. Lisa Murkowski was in town to attend the opening of the chemotherapy suite, and in a separate interview said she’s pleased with the investment Ketchikan is making in its hospital.

“I think it’s really credit to this community that given what you’re faced with from a budget perspective, that this community has made a commitment to say this is a public health service that we want to make sure is provided,” she said. “Not only the infusion center, but all that you’re doing with the hospital. I think it speaks volumes.”

Pre-construction work is starting on the first phase of the hospital’s larger renovation plan. That phase will cost an estimated $62 million, and will include an upgrade of the 50-year-old surgery suite, plus a larger clinic and additional parking.

(Maria Dudzak contributed to this report.)