Deputy commissioner: Give SB21 a chance 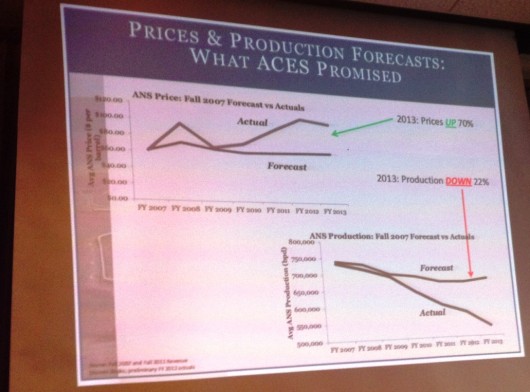 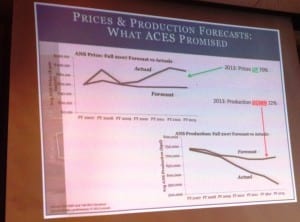 A slide from Bruce Tangeman’s Wednesday presentation to the Chamber of Commerce.

The deputy commissioner with the Alaska Department of Revenue was in Ketchikan this week, talking with local groups about SB21, the oil tax bill that was approved by the Legislature, but is the subject of a repeal initiative that will be in front of voters this August, during the primary election.

Bruce Tangeman spoke to both of Ketchikan’s Rotary clubs and to the Chamber of Commerce. He also stopped by KRBD for a one-on-one interview.

Bruce Tangeman has been living and breathing Alaska’s oil tax system for a few years now, and he said it’s not a simple topic, no matter which side you’re on.

“Everybody’s trying to fit their own personal views onto a bumper sticker in this state, and this state has the most complicated tax structure, definitely in North America, probably the world,” he said.

That structure, which taxes net profits rather than gross revenue, includes numerous credits meant to encourage production, and before SB21, a sliding tax on profits that changed based on the price of oil. Tangeman said that sliding tax was too volatile, and it discouraged oil companies from investing in Alaska, especially when the price of oil is high, because that tax rate went up significantly at higher per-barrel market prices. And he said that made other sources of oil more economical to develop.

That was a new experience for Alaska.

North Dakota, California, Texas – all areas that, when the price of oil is high, and along with it, Alaska’s tax rate  — Tangeman said were more attractive. Exploration in Alaska declined, as well as production. And with 90 percent of state government revenue coming from oil, Tangeman said something needed to be done.

Even state Sen. Bert Stedman, one of the strongest critics of SB21, agrees that the sliding tax was a problem that needed to be fixed. Stedman’s argument against SB21 was the tax cut on existing wells. He has introduced a bill in the state Senate that would eliminate some of those tax benefits for oil companies.

Tangeman said he respects Stedman’s concerns and knowledge, but Tangeman believes Alaskans should give the new tax structure a chance to work. It’s been in place for two months, and Tangeman said it’s already getting positive results.

“We’ve actually seen a new rig go to the North Slope, and it’s a production rig,” he said. “They’re drilling holes. We forecast very conservatively the production side of the equation, and we’re seeing much more activity than what we anticipated. There’s another rig coming next year, and those are the types of investments that we wanted to incentivize and see happen.”

But, what about that “$2 billion giveaway” argument against SB21? Tangeman said it’s not true, and the state budget is lean this year for reasons unrelated to SB21. The price per barrel dropped, production declined and oil companies invested more money in their Alaska projects. That last point is a good thing, but, more investment means less net profit, which means less tax revenue for the state – at least for now.

“And that’s the double-edged sword,” Tangeman said. “We want, all of us – Democrats, Republicans, left, right, center – we all want to see investment, but it does affect the revenue that comes into the state.”

There’s another reason the budget is so tight this year: Tangeman. He did it, and he freely admits it.

“The state used to have a production forecast that was very optimistic and rosy, and always predicted the best possible outcome in two years, five years, 10 years,” he said. “When I started working at the department, I looked back and recognized – and everyone else did, too – when you’re overly optimistic by 60-70 percent every year, something’s wrong.”

So, the department changed how it forecasts oil production in Alaska. Tangeman said that, instead of an overly optimistic forecast on which to base the state’s budget, they were conservative, in hopes that production would actually exceed the forecast for the first time.

“That kind of led to some of the discussion this year about the $2 billion giveaway, production is not increasing, and the world is coming to an end under this system,” he said. “What we’re seeing is, the forecast under ACES used to be the optimistic forecast. The goal was to put a more conservative line on the table, and hope to beat it.”

During his presentation to the Chamber of Commerce, Tangeman added that Alaska is the one oil-producing state with declining production, and that oil investment and jobs have been flat in the state since 2009, compared to increases elsewhere.

An audience member asked what happens if the oil tax is repealed in August. Tangeman stressed that he can’t speak for or against the referendum. But he can say that, right now, if SB21 is repealed, the state will go back to the former oil tax system, known as ACES.