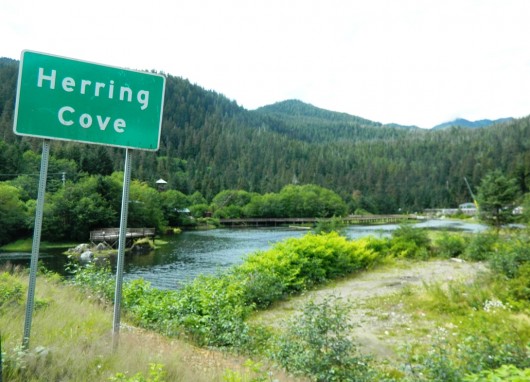 Following Monday’s Ketchikan Gateway Borough Assembly meeting, the borough will start requiring permits for tour operators that take visitors to Herring Cove during the busy summer tourism season. The permits won’t cost businesses anything up front, and the program will be paid for primarily through the borough’s share of state cruise passenger head tax funds, but violating the permit rules could lead to repercussions.

Violate the rules, and you could have your permit revoked. That’s the program, in a nutshell, and the borough hopes it will alleviate the congestion in Herring Cove, and make the area safer.

Herring Cove is a popular tourist destination, but there’s little if any infrastructure there. Visitors often congregate on the busy, narrow bridge, which is part of the highway, in order to get a better view of wildlife in the creek below. The borough has started plans for a pedestrian bridge. But that won’t be ready this summer.

There’s also not much parking out there, and tour operators say the rule against parking in the right-of-way could hurt their businesses. Before the Borough Assembly gave final approval for the program, Planning Director Tom Williams addressed parking.

“We’ve spoken to one of the property owners who has an industrial piece of property large enough to accommodate somewhere between five and 10 of the large coaches,” he said. “And also has a large area that could provide for parking of smaller vans and taxis.”

That property owner also is willing to let the borough place port-a-potties on the site, for the convenience of cruise passengers. One of the complaints from residents of Herring Cove has been about desperate visitors banging on front doors to beg for the use of a bathroom – or, worse, using the bushes.

Jason Kolanko offered yet another option for parking.

“Our lot is an industrial zoned lot. Our property is adjacent to both Herring Cove bridge and Herring Creek itself. We could provide parking,” he said. “We’ve done some preliminary layouts of the lot and we could provide up to 6,000 square feet of parking. What’s unique to our lot is that we are adjacent to the creek, and we could also provide viewing access, as opposed to just the parking.”

Kolanko said he’s already spoken to a contractor, and believes he could offer parking for rent on the property before the first cruise ship arrives this year.

According to the Ketchikan Visitors Bureau, a small cruise ship arrives on April 26th, but the official kickoff is April 28th, when the 1,400-passenger Volendam is due to arrive.

Assembly Member Bill Rotecki responded to the offers presented during the Assembly meeting.

“My interest is to give it to private enterprise to come up with a solution,” he said. “If you have property and you want to rent parking, I imagine that the planning director is very concerned that there’s an awful lot of operators that are going to be beating up on him. So, if he knows who might want to provide parking, he can refer that information to the operators.”

Speaking against the permit program, Assembly Member Glen Thompson asked how the borough can enforce rules on a state highway.

Borough Attorney Scott Brandt Erichsen agreed that the borough can’t issue citations to individuals who wander into traffic on South Tongass Highway, for example, but the borough can cancel a permit if a tour operator is negligent in providing proper direction to customers.

Thompson added that he believes the permit program will not improve the problem, and might actually make it worse unless the borough limits the number of permits that it issues. He and Assembly Member Todd Phillips voted against the program, making the final vote 4-2.

Monday’s Assembly meeting lasted much longer than usual, and the Assembly chose to recess the meeting at 10 p.m. They were to reconvene Wednesday, after the 5:30 p.m. Board of Equalization meeting.