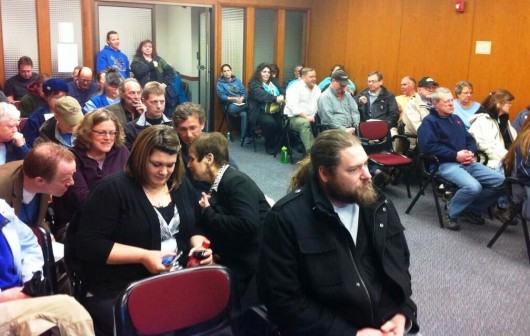 Anger, frustration and fear were the overriding emotions during the long public comment period. About a dozen people spoke, and many more murmured from the audience. None supported the city’s decision to switch to chloramine – which is chlorine combined with a small amount of ammonia.

The city has been working toward this switch for about a decade, and while there were articles, advertisements and public meetings about the change, many people say they didn’t realize it was going to happen until just recently. A group called United Citizens for Better Water formed within the last two months to rally support against the change to chloramine.

Amanda Mitchell is the primary organizer of the group, which is collecting signatures for a ballot initiative that, if approved, would prohibit the city from using chloramine.

“This is not just about chloramination and adding ammonia for our disinfection,” she said. “This is about our choice to direct what we consume. What do you think? Do we have a right to choose? So I’m going to ask that you guys hold off on putting the ammonia into our water until we can find out this ballot issue.”

Council Member Bob Siversten then noted that there was an election, in which city voters approved bonds to pay for the new water treatment system. He said he supports clean water, but his definition is different.

“Chloramination has been used 90 years all over the United States,” he said. “It’s increasing in use, to meet the federal standards. We’re following good science. I have children, I have family in this town, I have grandchildren. If you think I’m going to put something in that’s going to harm them? It’s not going to happen. “

Mitchell then asked the Council to sponsor a forum to get more information out to the community. West responded that the city had forums, and the only alternative that would work for Ketchikan would be a filtration plant.

“A water filtration plant, the estimate is up to $50 million to build,” she said. “This science has been proven. It is used across the country. One in five people drink chloraminated water. It’s used in New York City, and in Portland, Oregon, and in Denver and San Fransicso. It’s not just some new technology that we just whupped up. “

Mitchell responded: “What does that have to do with an open forum? We obviously have a very large crowd and a very concerned populace here, why not have an open forum now?”

“When you make a decision sometimes, the decision has been made,” West said. “We have built this plant ased on a vote we had years ago. We’ve been working on this for 10 years.”

Mitchell responded that a lot can change in 10 years.

Other speakers questioned why the city chose a system that likely will have to be updated or changed, rather than one that could last for several decades, and still others said that they won’t want to use the city’s water if it is switched to chloramination.

Here’s Hannah Ramiskey, who said the Council should listen to the public, because there are many frightened people out there.

“I think these people need to be reassured that you picked the best system, not the cheapest system,” she said.

During City Council discussion of the issue, only DeAnn Karlson spoke in favor of delaying the switch to chloramination, at least until after the ballot initiative process is complete.

“I guess I feel there is so much emotion about this right now, I don’t know what the harm would be to at least let that process take its course,” she said. “At that point, depending on which way it ends up, a final decision could be made.”

City Manager Karl Amylon responded that the state Department of Environmental Conservation expects the city to switch to chloramine this spring. And a delay could spark intervention, and a serious conversation with state officials about moving toward a filtration plant.

Floyd Damron with engineering firm CH2MHill attended the meeting. He addressed filtration, and said it would take between five and 10 years to build such a system, depending on the funding available. In the meantime, he said, the city likely would have to use chloramine to comply with EPA regulations.

The United Citizens group is unlikely to give up, despite the Council vote. Group members continue to collect signatures for the ballot initiative petition, which is due by April 2. Once that is submitted, the city clerk will need to verify that it has enough valid signatures, and the city attorney will review it to make sure it complies with the law. If it passes those hurdles, then the city must put it before voters within two months.