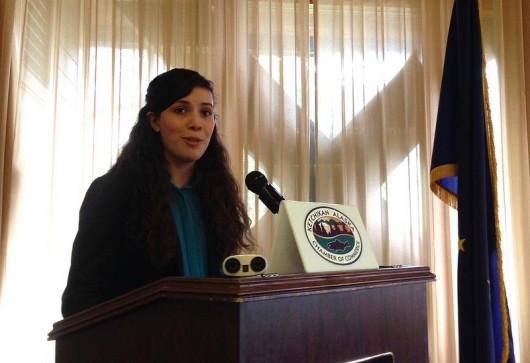 Lisa Torres of Ketchikan will perform a saxophone solo.

12 young women from around the state are gathered in Ketchikan this week to showcase their intelligence and talents in the Distinguished Young Women contest. They’ll be competing for cash awards and college scholarships. On Wednesday, they introduced themselves to community members at the Chamber of Commerce lunch.

The women will compete on Saturday, and the talents they’ll be showing off are as varied as the towns and cities they come from. They include acrobatics, cello, dramatized poetry, violin, hip hop dance and singing.

Many of the girls heard about the Distinguished Young Women scholarships from high school counselors or past participants from their towns. 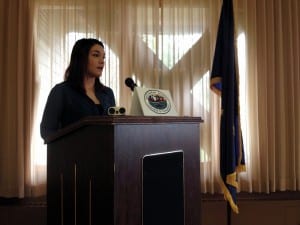 Crysta Davis of Ketchikan will be performing a hip hop dance routine.

Three of this year’s competitors are from Ketchikan. Mikala McKim, Lisa Torres, and Crysta Davis. They know about the competition because it’s held here every year.

“I’ve watched it for basically seven years, since it’s been here,” said Davis. “And being born here, you know it’s just always a fun thing to go see.”

Jenny Sheasley from Anchorage described what she likes about DYW.

“It’s not just a pageant,” she said. “You know, people are like, “Oh you’re going to do a pageant.” But no, it’s really comprehensive. It encompasses, fitness and talent and scholastics and everything. So I thought that was really neat.”

Robert McClory is a counselor at Ketchikan High School who has been involved in organizing Alaska’s DYW competition. A few years back, his daughter, Aimee, won.

“Often when people think of scholarships, they think of a very competitive, cut-throat kind of a business,” he said. “And I think what the girls here have found out is it’s much more of a cooperative venture.”

Many of the girls echoed that statement.

“Within the day and half [that we’ve been in Ketchikan], watching us already grow together, as friends, the companionship between each other – our differences have brought us closer,” said Mykaela Ryback of Soldotna. 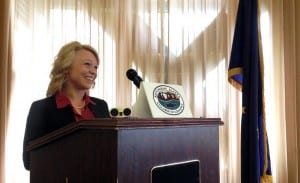 Because the girls’ homes are spread out far around the state, many of them had never met people from other regions in Alaska.  A few had never been to Ketchikan before.

Jessica Saiki from Wasilla was happy to take part in some Ketchikan activities in the water and forests.

“Going kayaking and ziplining, that’s…I’ve never had an experience like that before so I’m just really grateful,” she said.

Lisa Torres is one of the three from Ketchikan.

“We do have such a beautiful community,” Torres said. “And it’s been so great showing these ladies form all over Alaska our wonderful town. Everyone’s used to going up to Anchorage for something, but it’s really awesome that we’re able to have it down here, and the support that the whole community brings.”

The competition takes place Saturday at the Kayhi auditorium at 7 p.m.

The winner will represent Alaska in the national Distinguished Young Women competition in Alabama in June.